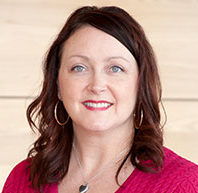 The American Pharmacists Association (APhA) announced that WSU’s Julie Akers will receive one of its profession-wide awards at the annual meeting later this month.

Akers, a clinical assistant professor at the WSU College of Pharmacy and Pharmaceutical Sciences (CPPS), was selected for the APhA’s 2019 Good Government Pharmacist-of-the-Year Award. She was nominated by WSU faculty colleague Jennifer Robinson for her contributions to the pharmacy community through her involvement in the political process.

“Julie has helped me see the importance of politics and policy when advocating for our profession and for our patients. Julie has had this same effect on countless other pharmacists, student pharmacists and community members,” Robinson said in her nomination. “Her excitement about the political process and her passion for advocating for our profession could motivate a rock to get involved.”

Akers demonstrates this excitement in her role as the Washington State Pharmacy Associate (WSPA) faculty advisor. Akers works with WSPA student leadership to educate student pharmacists on state level heath care legislation. As part of this effort, she helps organize an annual Legislative Day. During the event each spring over 100 student pharmacists travel to Olympia, Wash. to meet with members of the state legislature to discuss current bills and advocate for the practice of pharmacy.

Akers has also served on the Washington State Pharmacy Association (WSPA) Board of Directors for over ten years and served as president of the association in 2012. She serves on the American Pharmacists Association (APhA) government affairs committee, and has represented the State of Washington as an APhA delegate for several years. For the past 3 years, Akers has represented the college at the state Pharmacy Quality Assurance Commission meetings where she works to advance the role of pharmacists in Washington through both the legislative and rule-making process.

Akers will receive her award at the APhA meeting, March 23–24 at the Washington State Convention Center in Seattle.