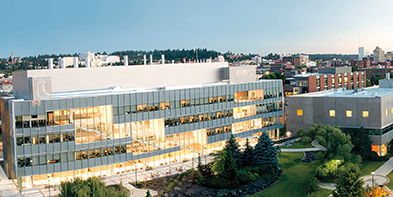 The Washington State University College of Pharmacy has a legacy for developing outstanding health care professionals who go on to become leaders in the profession of pharmacy. In the 1970s Dean Emeritus Allen I. White wrote that the future of pharmacy lay in the hands of those with the entrepreneurial spirit and vision of innovation to bring the practice of pharmacy into alignment with the needs of an evolving health care practice environment. These words still ring true today.

Since 1979 pharmacists in Washington state have enjoyed the ability, if he or she chose, to partner with a physician to prescribe under collaborative drug therapy agreements, which allows pharmacists to provide services that are much needed in the rural and underserved areas of our state. Within these local communities is where the pharmacist, as a care provider, has the greatest impact on population health. Today, every WSU pharmacy graduate carries the expertise, skills and potential to be decision makers and leaders within their health care community.

This month, we highlight some of the pioneers in leadership and innovation in pharmacy practice that are within the community right here in Spokane—the hometown of the WSU College of Pharmacy. Whether these local alums are active advocates or quiet leaders-by-example, they exemplify how the future of pharmacy is evolving, and how the adapting role of the pharmacist is more important than ever to the health of our patients and to the health of our communities. 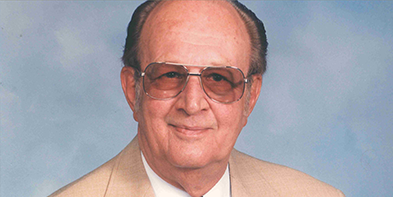 Bert Porter grew up in Spokane Valley. His father’s family first settled in the area in 1908. Porter graduated from the WSU College of Pharmacy in 1950 and in 1958 opened his own pharmacy in Spokane. He was an advocate for the profession of pharmacy, campaigning for pharmacists to refer to themselves as “pharmacists” instead of the label of early days, “druggist,” and to refer to their business as a “pharmacy” as opposed calling it a “drug store.” Porter’s forward-thinking vision of the potential for pharmacy’s role in health care has left a lasting impression on the face of the profession.

Porter served as a military sealift command officer for the Air Force in Japan, where he was assigned as the officer-in-charge of the pharmacy technician school where he also taught.

In 1969 he was appointed by Washington Governor Daniel Evans to be the Eastern Washington co-chairman to the advisory committee to the Department of Social and Health Services, a position he held for 10 years. During that time he chaired the task force that drafted the Pharmacy Practice Act, and he also contributed to the Pharmacy Technician Bill and the Drug Substance Bill. Porter is a past president of the Spokane Pharmacist Association and Washington State Pharmacy Association. He also served on the Spokane Pharmacy Association’s (SPA) board of directors for many years. Porter retired in 1993 but stayed active in pharmacy on the state and local level.

“He has championed for independent pharmacy his entire life and he’s probably spent as many hours as a volunteer representing the interests of the pharmacy community as he did running his pharmacy,” said the SPA president, Manpreet Chahal, in a 2014 speech that honored Porter with the SPA Lifetime Services Award. “The pharmacists of today owe him, he was a true visionary.”

In 2007, Porter was named Outstanding Alumnus of the Year for his personal achievement and contributions to the profession, the community and society at large that have brought distinction to the Washington State University College of Pharmacy.

Larry Bettesworth was an influential leader in the Spokane health community. Bettesworth was responsible for developing Sacred Heart’s tele-pharmacy outreach project, which targeted the rural and underserved communities throughout Washington state. He ran the pharmacy practice residency program and was the director of pharmacy at Spokane’s Sacred Heart Medical Center until 2006 when he died in a tragic tractor accident. The Providence Healthcare Foundation established the Larry Bettesworth Health System Pharmacy Student Award to honor his legacy as a trailblazer in promoting patient access to pharmacy services in small communities.

Rob Leland grew up in Spanaway, Washington. He chose Washington State University for the experience of a big college without the big city.

“WSU in Pullman or Spokane has top notch academics and a great learning environment. Furthermore, you can’t beat the WSU logo,” says Leland. “Luckily for me, I was accepted into the pharmacy program at Washington State and I have found the perfect profession.”

Leland met his wife, Shelly, while learning to country western swing dance during pharmacy school. They have been married for 22 years and have one son named Nathan. Leland graduated from WSU in 1997. He knew someday he wanted to own a pharmacy and discovered a passion for working with the mental health population while interning at a prison pharmacy in Walla Walla. He became a board certified psychiatric pharmacist in 2008.

“I opened 1st Avenue Pharmacy 11 years ago to serve the mental health population in Spokane as I saw a need for a compassionate alternative to the big box store pharmacies to provide specialized services to increase medication compliance for this population,” says Leland.

1st Avenue Pharmacy in Spokane sees patients on a flexible appointment schedule by a nurse and a pharmacist for counseling, administration and follow up monitoring of injectables and oral mental health medications. These advanced and highly needed services are having a positive impact on the community. The pharmacy is located close to a community mental health center and to public transportation.

“I believe it was easier to collaborate our unique pharmacy services with local providers due to Spokane’s size, where many of the medical disciplines work closely together,” says Leland. “I was able to develop much-needed services here in Spokane to help our underserved mental health population.”

1st Avenue Pharmacy serves as a training site for pharmacy students from Washington State University and other pharmacy schools. It is also hosts pharmacy technician training programs as a practice site for clinical skills development.

“I enjoy their enthusiasm and excitement for the profession. It’s tough to stay current on all the new products, regulations and current events—the students keep us up to date and their enthusiasm is infectious,” says Leland. 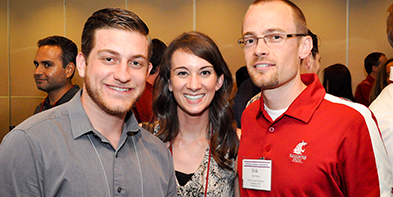 Erik Nelson is a Spokane native. He always wanted to go into a medical career to help people live healthier lives, but he had a huge problem with the sight of blood.

“So pharmacy was the most logical choice,” says Nelson.

“I choose WSU because I wanted to stay close to family in Spokane—my wife and I had a baby at the time when I started pharmacy school. I heard great things about the program and that they treated their students like people and not just a number,” he said.

Before starting the Doctor of Pharmacy program at WSU, Nelson thought there were only two choices in pharmacy: either work in a hospital or a chain pharmacy.

“After starting school I quickly realized that the possibilities were endless. Participating in the NCPA Business Plan competition under the faculty guidance of Linda Garrelts Maclean and Bill Fassett helped prepare me for the amazing ride I have had since graduating,” says Nelson.

The business plan his team developed focused on bringing the “old fashioned” independent pharmacy model into the modern age while preserving its customer service mission and deep community ties. They won first place in the national competition.

“I never thought in my wildest dreams that I would be a pharmacy owner right out of pharmacy school,” he said.

Nelson graduated from the WSU College of Pharmacy in 2013. He now owns and runs Sixth Avenue Pharmacy in Spokane, a pharmacy that has been operating in the community for over 50 years. The pharmacy specializes in custom compounding, specialty packaging and professional grade supplements that pharmacy chains don’t offer, says Nelson.

Sixth Avenue Pharmacy also provides internships to WSU student pharmacists. “It’s great to be in the same city as the college, collaboration is easy,” says Nelson.

But the best part about being involved with the college for Nelson is staying connected with fellow alumni.

“It’s like we’re part of one big family regardless of the year you graduated or what your practice area is, it’s really cool.”