50 years later, the class of 1965 pays it forward
Contributor spotlights from the Washington State University College of Pharmacy Class of 1965 Endowed Scholarship 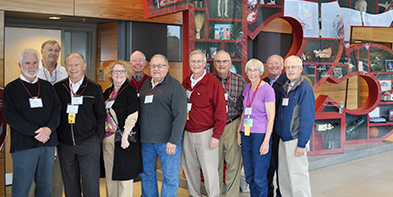 In 2015, the surviving members of the WSU College of Pharmacy class of 1965 came together for their 50 year class reunion. Each year the WSU Alumni Association coordinates a 50 and 60 year class reunion for WSU graduates. The three-day event in Pullman allows for WSU Golden and Diamond Graduates to reconnect with old friends and make some new ones.

The class of 1965 Golden Grads from the College of Pharmacy made a detour from the regularly scheduled events in Pullman to visit the dean and tour the college’s new home at WSU Health Sciences Spokane. The events surrounding their Golden Grad reunion inspired them to make a formal gesture in “paying it forward” to future student pharmacists who would go through the Doctor of Pharmacy program at WSU.

The class established an endowed scholarship to, “further the pharmaceutical professions and to emphasize excellence in pharmaceutical care and support professional growth,” of future Cougar pharmacists.

The scholarship was fully endowed this year and unveiled at the college’s annual donor appreciation event, Celebrating Generosity, this spring. The fund will be awarded based on 1) financial need, 2) scholastic accomplishments and abilities, 3) contributions scientifically and socially to the community, 4) potentialities as a leader in the community both socially and scientifically, and 5) enthusiasm for the profession.

This endowment was also established in honor of the members of the class of 1965 that are deceased: Larry Lee Porter, Raymond W. Jones, David C. Kieffer, Genevieve A. N. Young, Frank Nichols, and Michael L. Standley.

The class of 1965 endowment will award its first scholarship in the 2016-17 academic year.

The class of 1965 is an extraordinary group of alumni who have gone above and beyond in giving back to the College of pharmacy. Below are a few highlights of members who made this endowment a reality.

“Dad (Gerald H. Oftebro) graduated in ’37 in Ag. Econ., so I learned the Fight Song early on. I never considered another university, and I am so glad I attended WSU,” says John Oftebro, class of 1965.

Oftebro is from Mount Vernon, Washington. After graduating from WSU, he worked in a variety of pharmacy positions for a few years and then purchased Kelley-Ross Pharmacy in downtown Seattle. After 34 years, Oftebro’s son Ryan took over the business that has grown into four apothecary-style pharmacies with a variety of specialties including compounding, hospice, long-term care, and HIV/AIDS. Oftebro was also involved in local, state and national pharmacy organizations, and is still heavily involved in volunteer work. He serves on the Dean’s Advisory Council for the WSU College of Pharmacy and is also on the Board of Trustees for the WSU Foundation.

“I have seen many grateful ‘thank you’ notes from scholarship recipients over the years, and this inspired me to initiate a scholarship from our class honoring our 50-year anniversary celebration. I have been overwhelmed by the donations from some of our class members and thrilled we were able to fund an endowed scholarship from the class of ’65,” said Oftebro.

“I was fortunate to receive scholarships and fellowships at both WSU and Harvard Business School, and have a strong personal commitment to give back,” says Gerald Danquist, class of 1965.

Danquist is from Plaza, Washington, which is about 25 miles south of Spokane. As a student at WSU, he was involved in both student government and pharmacy organizations. He was a member of Kappa Psi, Rho Chi, Phi Kappa Phi, and the Crimson Circle of Omicron Delta Kappa. After graduating with his pharmacy degree, Danquist worked in retail pharmacy for a couple years, and then worked with the U.S. Public Health Service in Oregon. In 1969 he went back to school, this time at Harvard for his MBA and graduated in 1971. He then began a 33-year career with Eli Lilly and Company that took him around the world working for the company’s international division. Danquist is now retired and lives in Carmel, Indiana, and he still serves on the Dean’s Advisory Council for the College of Pharmacy.

She came to WSU partly because her older brother, Glen Puterbaugh, was already a student here, but also because she qualified for one semester of free housing for being in the top 10 percent of her high school graduating class.

Marshall is from Grandview, Washington, which is in the lower Yakima Valley. After graduating, she went into the Peace Corps to work with tuberculous clinics in Turkey. She returned to Washington, D.C. when the project ended one year later. She worked her way back to Seattle where she landed at Group Health’s Central Clinic, where she met her husband, John, in the summer of 1970. John had just finished pharmacy school at WSU and was completing a summer internship. He went on to medical school and then in 1974, married Julia. They moved to Miami, Florida, while John completed an internship and residency in family practice. They returned to Seattle in 1977 and enjoyed long careers at Fred Meyer and Group Health. Julia retired in 1990 with the arrival of their first child. John died in 1998 after complications from a rare form of synovial sarcoma found in the lung. Julia is also establishing a separate endowed scholarship at the College of Pharmacy to honor John.

“John and I both benefited from various scholarships while at school,” said Marshall. “It’s time to contribute back.”

Marshall has a son who is an engineering student at Western Washington University, and a daughter who lives in Edmonds near Seattle.