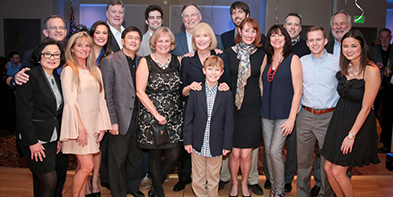 The Doane family has established three separate endowed scholarship funds at WSU to benefit students in the Doctor of Pharmacy program. Because of their generosity, the college has been able to award a total of 73 individual scholarships to help students pay for their pharmacy education over the last three decades.

The legacy began with Ron Doane, from Cashmere, Washington. Ron graduated from WSU with his pharmacy degree in 1950. He practiced pharmacy with his brother, Wayne, at Doane’s Valley Pharmacy in Cashmere.

Ron met his wife Carol at church camp on Lake Wenatchee. They fell in love and were married on August 11, 1946, after he was discharged from the Army following World War II.

“We all grew up in Cashmere,” says David, Ron’s son. “I vacuumed Dad’s pharmacy when I was young, probably was paid by the soda fountain.”

Ron was a leader in his community and was involved in a variety of community organizations ranging from Little League and PTA, to serving on the city council, as mayor, and as president of the Cashmere Chamber of Commerce. He was honored as Washington State Community Pharmacist of the Year in 1987, received the Washington State Athletic Directors Association Award in 1989, and was named Cashmere Citizen of the Year in 1975 and 1989.

In 1994, the WSU College of Pharmacy named Ron its Outstanding Alumnus of the Year.

Reflecting the admiration that the Cashmere community holds for Ron and his legacy, the Cashmere High School gym was renamed the Ron Doane Memorial Gymnasium.

Ron and Carol had four children. Rick, David and Ken all graduated from the WSU College of Pharmacy. Their daughter Nancy went through nursing school at WSU in Spokane.

“Dad used to refer to her [Nancy] as the rose amongst the thorns—Rick, Ken and I being the thorns,” said David.

For the Doanes, the WSU College of Pharmacy has always been like family.

“Many early photos of our childhood were of Rick and me in WSC sweatshirts. There was never a doubt that we would attend WSU,” says Ken.

“The first time I walked up the steps of College Hall a gentleman was coming down, we smiled at each other in passing. Suddenly a voice behind me yelled ‘Hey!’ I turned around and he said, ‘You’re a Doane, I see it in your eyes.’ That was the first time I met Dean Allen I. White,” said David. “What a very special welcome!”

Rick Doane was born in Colfax. There was not enough married housing on the WSU campus so his parents had to commute to Pullman. Ron and Carol moved to Pullman when he was one year old and later relocated to Cashmere after Ron finished school.

Rick graduated with his pharmacy degree in 1971. He owned and operated many pharmacy related businesses including Evergreen Pharmaceutical, a pharmacy that serviced long term care facilities throughout Western Washington.

Rick is a past-president of the Washington State Pharmacists Association. In 1996 the WSU College of Pharmacy named him the Outstanding Alumnus of the Year, and he received the university’s Outstanding Service Award in 2013. Rick has also served on the WSU board of governors, where he chaired the investment committee. He currently serves on the board of trustees for the WSU Foundation.

Rick’s wife, Jacquelyne “Jacque” Doane, was a member of Pi Beta Phi and a cheerleader at WSU. She graduated with a degree in home economics in 1972, and has been an active volunteer and supporter of WSU ever since. She earned her master’s degree in special education from the University of Washington in 1973, and taught in the Lake Washington School District until 1979.

Ken Doane graduated from pharmacy school in 1975. He spent 10 years working in hospital settings—five years at Memorial Hospital Medical Center in Long Beach, California, and five at Swedish Medical Center in Seattle. In 1986, He went to work with his brothers at Evergreen Pharmaceutical and spent nearly 30 years as a consultant pharmacist in long term care.

“My passion for a clinically-oriented career was born at WSU,” says Ken. “Dean White and Keith Campbell helped me decide what path to follow.”

Ken and Barbara met on a blind date in 1993, which was arranged by his sister Nancy and her husband, and they have been married for 15 years. They live in Kirkland, Washington, and have a Bernese Mountain Dog named Deacon.

Ken is retired and enjoys creating pencil drawings, mostly of Native American relics. He remains a big Cougar fan, and has a Cougar logo painted on the sports court at his home.

After graduation from the WSU College of Nursing in 1978, Nancy Doane Kamitsuka was a neonatal intensive care nurse for many years at the University of Washington NICU in Seattle. That is where she met her husband Mike Kamitsuka who is a neonatologist and continues to work at the NICU at Swedish Hospital. Nancy is now retired.

David Doane graduated with his pharmacy degree in 1986. His first job out of pharmacy school was at Evergreen Pharmaceutical.

“It was pretty exciting because both of my pharmacist brothers were there,” says David. “The best part though, was that is where I met my wife of going on 26 years. Wendy has always been ultra supportive of my career in pharmacy.”

David worked in long term care for over 20 years and now sells pharmacy automation into the same industry. He has served on the WSU College of Pharmacy Dean’s Advisory Council since 2007.

“Having mentors like my brothers, my father and Keith Campbell has meant a lot to me,” said David.

David and Wendy live in Kirkland, Washington, with their golden retriever named Dr. J. They have a son, Drew, who is currently a student at WSU studying basic medical sciences.

“We still enjoy getting to Pullman, especially when we can spend time with Drew,” says David.

“I enjoy giving back to the college that was so instrumental in my career and watching the ongoing evolution of the program over the years,” says Ken.

“I am honored to be selected for this scholarship, and very grateful that you have invested in helping me to become the best pharmacist that I can possibly be. The relationships that I have formed with patients during my short time in pharmacy have shown me the impact that a pharmacist can make on a patient’s life. I want to continue making this impact as I move forward in my journey to become a pharmacist.”
Rachel Lines, class of 2005, Richard and Jacquelyn Doane Endowed Scholarship recipient

In another tribute to the long history the Doane family has with WSU, Rick and Jacque established the Richard and Jacquelyn Doane Endowed Scholarship in Pharmacy in 2005. This scholarship was established to assist student pharmacists from Eastern Washington in achieving their academic goals, and is awarded to WSU Pharm.D. or graduate students who have a financial need to continue their pharmacy education at WSU.

“The generosity of donors like you makes a much greater impact in my life than you know. The actual dollars involved certainly help, but knowing there are people out there willing to support the education of the future generation is incredibly humbling and encouraging. Hopefully at some point in the future I will be in a position to do the same.”
Sean Leonard, class of 2015, Doane Family Scholarship recipient

“Receiving this scholarship motivates me to be the best pharmacy student possible. I look forward to being able to give back to the community once I begin my career in pharmacy. I thank you for your confidence and willingness to help me achieve my goals.”
Regina Otake, class of 2009, Doane Family Scholarship.