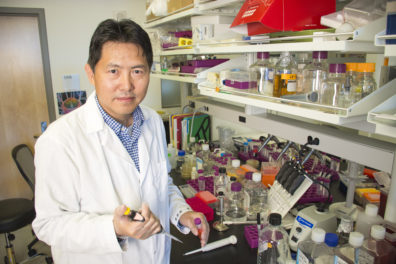 SPOKANE, Wash. – A researcher at Washington State University Health Sciences Spokane has developed a new technology that harnesses the immune system to deliver drugs directly to infection sites within the body.

“Most diseases develop in local tissues within the body,” said Zhenjia Wang, an associate professor in the WSU College of Pharmacy and Pharmaceutical Sciences. “That makes drug delivery challenging, because many drugs don’t have targeting properties—they simply go wherever they go. By delivering drugs to the disease site specifically, we can improve treatment while dramatically decreasing side effects.”

Wang’s technology uses neutrophils—a type of white blood cells that play a key role in the body’s natural immune response—to deliver drugs directly to diseased tissue. Neutrophils make up as much as 70 percent of the white blood cells that travel through the bloodstream to help fight off bacteria, viruses, or other pathogens that invade the body and cause inflammation in affected tissue.

Here is how that works: When inflammation occurs, the immune system releases white blood cells into the bloodstream to fend off the invading pathogens. Inside the infected tissue, inflammation triggers endothelial cells— which line the interior walls of blood vessels—to start producing molecules that stick to receptor molecules in the neutrophils, causing the two cell types to bind together and allowing the neutrophils to start fighting the infection. It is this interaction that allows neutrophils to home in on inflammatory sites, which makes them of interest to scientists working on targeted drug delivery.

Wang’s technology takes neutrophils and removes their contents, which yields tiny hollow cell membranes that he loads up with drug molecules. The resulting neutrophil-based “nanovesicles” retain the same characteristics that cause neutrophils to seek out inflammation, which ensures that drug molecules are automatically sent to where they are needed. And because they are made from human cell membranes, the body does not reject and eliminate them, as it does with artificially produced membranes used as part of earlier technologies, Wang said.

As part of their preliminary work, Wang and his research team used a rodent model of acute lung injury to test the technology’s feasibility to deliver anti-inflammatory drugs directly to the lungs, with promising results.

Now, with funding from a new, four-year, $1.3 million grant from the National Institutes of Health, Wang will do further research to validate and refine the new technology. As part of this, he hopes to delve deeper into how the nanovesicles interact with lung tissue and answer outstanding questions related to nanovesicle drug-loading techniques and capacities.  Finding answers to these questions will take him one step closer toward the next goal, which is to get the technology tested in human clinical trials.

“Down the line, our technology could potentially help treat not just lung disease, but a wide range of other diseases that involve inflammation, including stroke, cancer, and rheumatoid arthritis,” Wang said.