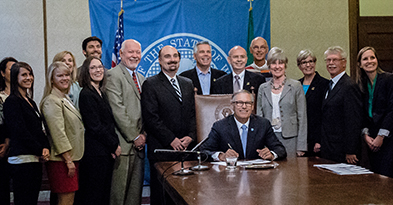 SPOKANE, Wash.—Linda Evans Parlette, a former Washington state senator and WSU pharmacy alumna, will be the keynote speaker at the commencement ceremony of the Washington State University College of Pharmacy at 1:00 p.m. Thursday, May 3, at the Martin Woldson Theater.

Parlette’s selection as the commencement speaker for pharmacy maintains the college’s practice to bring thought leaders to campus. Her record in state government is in alignment with the college’s position as a leader in advancing, promoting and protecting human health.

In 2015, legislation sponsored by Parlette was passed in Washington requiring insurance carriers to recognize pharmacists in the same way as other providers. Not all states have this kind of legislation in place and insurance companies routinely refuse to reimburse pharmacists for the growing number of services they provide. Washington was the first state to pass legislation of this kind.

“Linda Evans Parlette has made a real impact on the ability of a pharmacist to practice as part of the health care team to tackle the nation’s health care problems and collaborate on solutions to make our world a better place,” said Vice Dean Linda Garrelts MacLean. “She is a shining example for our graduating pharmacists and I am excited and honored to have her speak at commencement.”

Parlette represented Washington’s 12th Legislative District from 1997 to 2016 and is the fourth generation in her family born and raised in central Washington. Parlette graduated from Chelan High School as valedictorian, attended Washington State University and in 1968 graduated from the WSU pharmacy program with honors. During her time in the state Senate, Parlette served on several standing committees, but her main focus remained on Health Care, Natural Resources, and Ways and Means. Her experience as a pharmacist was a good foundation for her work on health care issues.

News media interested in interview availability should contact Lori Maricle at lmaricle@wsu.edu, or at 509-368-6679. Parlette will be available for interviews on Wednesday, May 2, based on interest and time allowance.

Full details on the WSU College of Pharmacy commencement ceremony can be found online at http://www.pharmacy.wsu.edu/commencement.