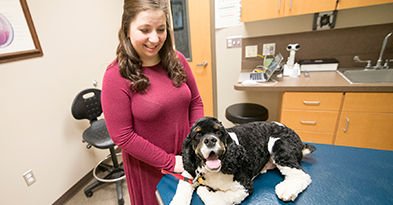 SPOKANE, Wash.—Shelby Denney, a 2017 Washington State University (WSU) pharmacy graduate, received a 2017 WSU Spokane Chancellor’s Award. The Chancellor’s Awards recognize students for their significant leadership, academic contributions to the campus and community, and their commitment to innovation and ingenuity in their chosen field. Denney recently completed her Doctor of Pharmacy degree at WSU in Spokane.

“Shelby is a critical thinker, a strong communicator and an exceptional leader,” said Linda Garrelts MacLean, vice dean of the College of Pharmacy. “She embodies the traits and characteristics that make her a deserving recipient of the prestigious Chancellor’s Award.”

Denney was presented the award during the 2017 WSU Spokane Commencement Breakfast on May 7. She was nominated by College of Pharmacy Assistant Dean Jennifer Robinson, and selected by WSU Spokane Chancellor Lisa Brown.

During her time in the College of Pharmacy, Shelby served as the WSU student liaison for the Washington State Pharmacy Association and led efforts to get her peers actively involved in the pharmacy profession at a state level. This included coordinating a legislative day in Olympia, encouraging her peers to attend local pharmacy conferences, and developing programming on campus. Over the last four years, Shelby’s campus involvement included serving as an instructor for a veterinary pharmacy elective and a co-instructor for a practical politics pharmacy elective.

“Shelby is the type of student who exemplifies what it means to be a Coug. Whatever Shelby does, she does it with a fire in her belly, love in her heart, and a smile on her face,” wrote Robinson in her nomination.

Denney is currently working as a clinical veterinary pharmacy resident at North Carolina State University College of Veterinary Medicine where she will specialize in medication therapy for animals. In the future, she hopes to open her own pharmacy that dispenses and compounds medications for animals.