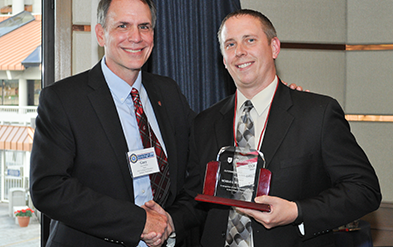 SPOKANE, Wash.—Nick Bruck, pharmacist and district pharmacy manager for Walgreens, was selected as the Washington State University (WSU) College of Pharmacy’s 2016 Outstanding Alumnus of the Year. He is the youngest alum to receive this honor since the college began the award in 1991.

“We truly appreciate his leadership, vision for the future, and ability to advance the practice of pharmacy,” said College of Pharmacy Dean Gary Pollack during the award presentation.

Bruck was presented the award at the Northwest Pharmacy Convention in Coeur d’Alene, Idaho, on June third.

In the past year, Spokane experienced an unanticipated mumps outbreak that affected more than 250 residents in the region. Bruck donated his time and skills to help students organize clinical teams that would provide MMR vaccinations at schools, community centers and other locations. WSU student pharmacist Tram Huong Pham, class of 2018, spearheaded the coordination of student volunteers for the clinics.

Student pharmacists are taught to give immunizations at the beginning of their second year of pharmacy school. A total of 64 student pharmacists in the WSU Doctor of Pharmacy program volunteered and participated in 17 clinics that Pham helped to coordinate. She worked closely with classmates Natalie Tucker and James Kent. The swift coordinated action ensured that families in need had ready access to vaccines right in their neighborhoods.

Earlier this spring, Bruck was honored with the Inland Northwest Service-Learning Partnership (INSLP) Impact Award for his contributions to the response surrounding the mumps outbreak. The INSLP Impact Award recognizes a partnership, program or initiative bringing higher education and community partners together to make significant impact on critical issues facing Spokane.

Further, the WSU chapter of the American Pharmacists Association Academy of Student Pharmacists (APhA-ASP) of which Pham, Tucker and Kent are members, received an Outstanding Service Award as part of the 2017 Students Serving Washington Awards. This award includes $7,500 to fund future service projects that address critical issues in the state of Washington.

“Without Nick’s initiative and commitment to advancing WSU College of Pharmacy students’ learning, students would have not had this hands-on experience that helped them realize the public health impact they can make as future pharmacists,” said Linda Garrelts MacLean, vice dean for external relations.

Bruck grew up in Spokane. He went to work for Walgreens as a pharmacy intern and worked his way up to pharmacy manager, eventually becoming the youngest pharmacy supervisor in the company nationally. In addition to his experience in the state of Washington, Bruck has supervised operations in pharmacies covering Idaho, Montana and Alaska. He is licensed to practice in Washington, Idaho, Montana, and Illinois.