SPOKANE, Wash. – On April 6, Pharmacist Patrick Tabon spoke to Washington State University student pharmacists about his career path and how to handle challenges that come up along the way. His presentation was part of the Preparing for Your Career in Pharmacy Seminar Series, which is hosted by the College of Pharmacy. 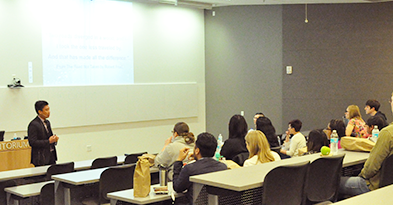 “All my success has come from my failures,” said Tabon. “Failure gave me a better idea of who I wanted to be.”

During Tabon’s first professional year of pharmacy school he lost the election to become the Kappa Psi Regent. Kappa Psi is a nationally affiliated pharmaceutical fraternity and one of the professional student organizations at the College of Pharmacy. The regent is the top leadership position for the local Kappa Psi chapter, much like what other groups call their chapter president.

“I wasn’t ready to be a leader,” said Tabon. But this disappointment helped him change his outlook and refocus his vision.

“Instead of being focused on the title, I became an active member,” he said.

This change in mindset proved to be successful as he became involved in multiple student organizations and held leadership roles within those organizations throughout pharmacy school.

After graduation Tabon pursued and was matched for a residency at Swedish Medical Center. Although the match rate for students was extremely low he broke through the crowd of applications in a few ways.

“The residency director told me that I matched because of my vision and hope for the profession,” said Tabon. “My CV items were not just a list but an investment. My experiences were not just stepping stones but connections.”

After his residency Tabon moved to southern California in hopes of owning an independent pharmacy. He ended up in a temporary position at PharMedQuest, an outpatient pharmacy, which he had not been trained in previously.

Within three months in this position he was moved to a supervisory role. In this position he helped develop a centralized dispensing program, bar code dispensing system and automation, and gained experience in injectable reviews and pricing. Through Tabon’s education and career he encountered obstacles but they never deterred him from his goals. During his lecture, he gave students advice on how to stay on track when they encounter these kinds of bumps in the road.

“Find yourself then trust your vision, accept the challenge ahead, be tactful in your wandering, and reframe the world around you,” said Tabon. 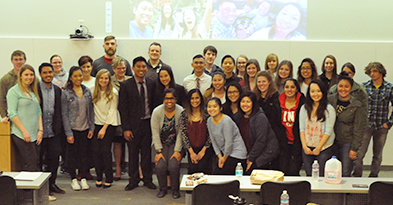 Tabon currently works as a heart failure clinical pharmacist for Monarch Healthcare in southern California but will taking on a new role this fall at the University of Southern California (USC). He will be an Assistant Professor of Clinical Pharmacy developing pharmacy based transitional care services and working as a pharmacist on an interdisciplinary team that serves the geriatric populations in Los Angeles. He graduated from the WSU College of Pharmacy in 2012 and is still highly involved with the college as an alumni mentor and a regional coordinator for the college’s alumni group CougaRx Nation.

Tabon is also active at the California state level as part of the California Pharmacists Association’s Leadership Development Institute (LDI). LDI is a yearlong program with the goal of developing transformative leaders to carry on CPhA’s mission to, “advance the practice of pharmacy for the promotion of health.”

Tabon was one of 16 pharmacists selected for the 2017 cohort, which will be working on gaining further support for clinical pharmacy services in the state. One of the benefits is the ability to work with state and national pharmacy leaders, who coach him through each phase of his own personal and professional growth, he says.

“The LDI program has been an eye-opening experience so far. I thought I would be an outsider because everyone in this year’s cohort graduated from a pharmacy school in California, but it was the complete opposite. I feel involved, engaged, and glad to be contributing on a state level in advancing the profession,” said Tabon.

The WSU pharmacy seminars are funded through the Dean’s Fund for Excellence and the college’s community partner, the Spokane Teachers Credit Union. For information on participating in the career seminar series, or to contribute to the Dean’s Fund for Excellence to help expose WSU student pharmacists to thought-leaders and industry innovators, contact the College of Pharmacy advancement office at gocougs@pharmacy.wsu.edu or 509-358-7651.