Why do some smokers get cancer while others don’t? 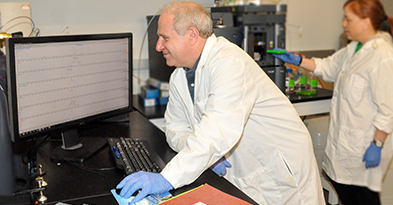 Individuals who have difficulty eliminating carcinogens have a greater risk of developing cancer. Because UGTs influence detoxification, they could play a key role in cancer susceptibility.

In 2015, the National Institutes of Health (NIH) awarded Dr. Lazarus a five-year, $2.6 million grant to study the body’s ability to prevent tobacco smoke components from causing cancer. In 2016, NIH awarded a supplemental grant to Ana Vergara, a WSU doctoral student in pharmaceutical sciences. Ms. Vergara is examining how genetic differences in UGTs affect smokers’ likelihood of contracting cancers of the lungs, head, and neck.

Together the two researchers will also study different forms of UGT proteins that are expressed by a process called “alternative splicing.” These proteins may destroy the detoxifying activity of normal UGT proteins.

Research collaborators at Harvard University and Duke University will validate the team’s findings in tissue samples from a large number of patients with lung, head, and neck cancers, as well as from healthy control subjects.

“If we could identify people at highest risk, then we could better target these individuals for tobacco cessation,” Dr. Lazarus said.

The researchers’ work could also lead to improvements in the treatment of cancer and a host of other conditions.

“A large percentage of drugs are metabolized by UGTs to get excreted,” said Dr. Lazarus. “Understanding how UGTs work could help us identify which drugs to give to whom. If a quick genetic test could determine what drugs will or won’t work well for a given individual, that would be a big step forward.”