SPOKANE, Wash. – Philip Krieter spoke with student pharmacists from Washington State University College of Pharmacy on November 2 about his work on the development of Narcan® Intranasal Naloxone formulation for opioid overdose.

Krieter works in the Division of Therapeutics and Medical Consequences at the National Institute on Drug Abuse (NIDA). 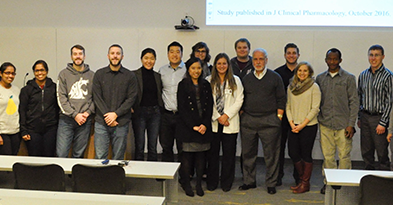 Deaths and hospitalization for opioid overdose have tripled from 1999 to 2015, said Krieter. Naloxone has been available to health care providers since the 1970s as an injectable treatment to reverse the respiratory depression caused by opioids. The biggest threat to life during an opioid overdose is when a person loses consciousness and stops breathing. Overdose is commonly triggered by hydrocodone, oxycodone or heroin.

To help prevent opioid overdose, a naloxone kit was developed. The first FDA-approved product was an auto-injector that was single-use and cost about $1,000, said Krieter. “Then a small company called LightLake came to us with the idea of delivering naloxone as a nasal spray that could be used by the general public.”

NIDA conducted the pilot and definitive pharmacokinetic studies on the new product.

“The research found the intranasal spray gave plasma concentrations that were greater than the dose delivered by the auto-injector,” said Krieter. “Since going on the market, the new formulation has been used by first responders with a high degree of success.”

“This new product has also brought about support in co-dispensing,” said Krieter. Community activists and health officials have advocated for patients to receive intranasal naloxone as they are receiving opioids in case of an overdose.

Krieter’s presentation was part of Preparing for Your Career in Pharmacy Seminar Series. The purpose of this series is to expose student pharmacists to career opportunities and leaders within those fields as part of the college’s mission to develop outstanding health care professionals. 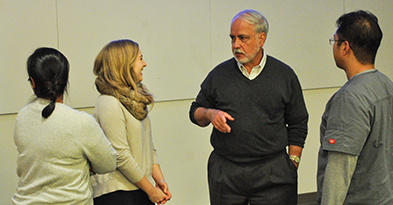 The College of Pharmacy has a history with intranasal naloxone training. Shannon Panther, a clinical assistant professor at the college, started the Save-A-Life Naloxone Safety Net Project which educates people about opiate overdose and teaches them how to use intranasal naloxone. This project supports the university’s land-grant mission to address some of society’s most complex issues, specifically the challenge “Sustaining Health: The Uncompromising Pursuit of Healthier People and Communities.”

The WSU pharmacy seminars are funded through the Dean’s Fund for Excellence and the college’s community partner, the Spokane Teachers Credit Union. For information on participating in the career seminar series, or to contribute to the Dean’s Fund for Excellence to help expose WSU student pharmacists to thought-leaders and industry innovators, contact the College of Pharmacy advancement office at gocougs@pharmacy.wsu.edu or 509-358-7651.