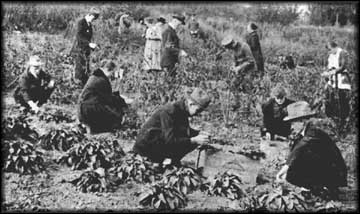 Pharmacy students at Washington State College in Pullman are photographed working in their medicinal plant garden in the 1920s.

College of Pharmacy Medicinal plant garden authorized in 1914, phased out in 1948

A project that Asa F. Maxwell began working on shortly after his arrival as Head of the pharmacy program was the development of a medicinal plant garden. The place of pharmacognosy in the education of pharmacy students was very strong at that time and it was common for colleges of pharmacy to maintain gardens as a source of plant materials so that students might become familiar with their identities and to instruct students in the collecting, drying and storing of them.

There also was a sharply increasing interest in the commercial growth of medicinal plants at that time. A diminished supply of important drugs from Europe was a result of the shipping blockade in the Atlantic Ocean established by Germany during World War I. Maxwell’s uninhibited enthusiasm for the commercial growth of medicinal plants may be noted from a series of three articles published under his byline in The Spokane Chronicle.

The purpose of the articles was to stimulate interest in the cultivation of medicinal plants in eastern Washington. Maxwell stated: “Although eastern Washington is an ideal growing location for many valuable medicinal plants this industry virtually is untouched.” He made particular mention of belladonna, digitalis, hyoscamus, stramonium and althea as examples of plants that could be grown successfully.

The second article in the series provided information, include characteristics, uses and cultivation, about belladonna and digitalis. The third dealt with hyoscamus, stramonium and althea. In the opening article, he claimed: “It is safe to say that hundreds of thousands of dollars annually is being paid out of this state for drugs which easily could be produced within 10 miles of the city of Spokane. An industry worth millions of dollars to the city could be built up with but little outlay of capital or expenditure of a great amount of land.” He estimated that a belladonna crop would bring in $400 per acre. He did include in the article the following admonition: “Unqualified statements concerning the ease and profitableness of drug plant growing must be taken with the proverbial ‘grain of salt’.” Apparently, he viewed the statements he had made as realistic. Nevertheless, the growth of the industry he promoted was never realized.

As a result of the efforts of Maxwell, a “Materia Medica Garden” came into existence in the spring of 1914. On March 7 of that year, Maxwell, with the cooperation of Oscar M. Morris, Professor and Head of the Department of Horticulture, who also signed the letter addressed to the Board of Regents, written on stationery of President Bryan, requested that the Board “set aside a suitable tract of land, preferably one acre in area, and that arrangements be made whereby the cultivation and proper care of such tract will be provided for.”

To justify the request, it was noted that “investigation and instruction in the cultivation of medicinal plants must be one of the prominent features in the curricula of Schools of Pharmacy,” and that “a shortage already exists in the supply of many plants that can be successfully grown in this section of the United States.” It was suggested that the latter situation warranted the investigation of commercial possibilities as well as scientific and professional concerns. The letter indicated that it was the potential commercial possibilities that might develop from the garden that caused the Department of Horticulture to support the request.

Apparently, Maxwell had made efforts to strengthen the request in still another way by previously obtaining promise of support from the United States Bureau of Plant Industry. The letter to the Regents noted that the Bureau had offered seeds, plants and cuttings to help start the garden. As a result of those efforts, on April 6, 1914, the Board of Regents, upon the recommendation of President Bryan, adopted the following motion: “That there be authorized the establishment of a Materia Medica garden for medicinal plants, particularly those of a commercial character. Such a garden to be operated in connection with the Horticulture Department, that department being credited and the Pharmacy Department being debited with the cost of labor.”

That action of the Board of Regents appears, on the surface, to have given Maxwell a positive direction for a project he greatly desired. Since the Department of Pharmacy did not have the equipment and other resources at the disposal of the Department of Horticulture, he had secured the cooperation of that department. Perhaps Bryan had indicated, early on in discussions with Maxwell, that the proposal would be better received if it were advanced as a cooperative venture. He also might have felt that for it to be successful, it would need the expertise available from the Department of Horticulture. It is interesting to note, also, the emphasis placed on the development of the project as a source of information that might be used to promote commercial production of medicinal plants and that the educational value of the project apparently was considered to be of lesser importance.

Location of Garden and Its Termination

The process used to determine the location of the authorized garden in 1914 may be looked upon now with amusement, and perhaps with some envy, seventy-five years later. Maxwell also wrote in his March 24, 1917, letter that President Bryan had granted use of a plot of land for the garden after “walking with me over various parts of the campus.”

The site selected was ‘that tract extending from the S.E. corner of the Campus, said corner being formed by the line that marked the south limits of the campus and the line that marked the west side of the old Windous orchard.’ That hillside location is marked now as lying between the building known as the Claudius Johnson Tower and the parking lot to the east and below the hill.

Changes in emphases in pharmacy programs as well as development of that area of campus for other uses led to the demise of the drug garden in 1948.