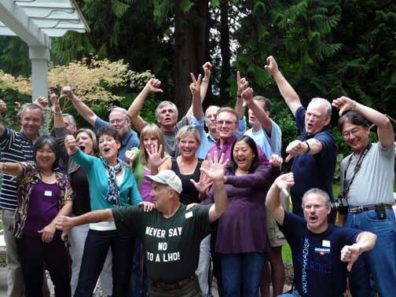 Photo from Lho Chi Reunion in Enumclaw, Wash., in fall of 2009

The Founders of Lho Chi

Excerpt from “The History of the Washington State University College of Pharmacy 1891 – 1991” by Allen I. White

LHO CHI. The piquant humor of some members of the class of 1978 was exhibited by satirically adopting the name of Lho Chi for a renegade social group that had its beginning in some secret place. The nature of its activities suggest that it most likely was on the sands of the Snake River. Unlike Rho Chi, high academic scholarship was not a criterion for membership. High scholarship was not a barrier to membership, however, as some members of Rho Chi were proud members of Lho Chi.

Membership in this society was gained through an open door policy, but which door was the passage to the activities of Lho Chi have not been published, nor has an official membership list. A cast of characters of the charter group may be seen in a photo entered (at who knows what cost) in the 1978 Chinook, p. 505. The important feature of the birth of this association of pharmacy students is its display of the camaraderie that exists, and is so highly appreciated, among students of the College.

The society persisted for several years after 1978 and experienced intermittent revivals during the next decade, but circumstances and time have led to its now being just a memory among some aging alumni seduced by professional responsibilities and life styles unrelated to those on College Hill. It has been heard that alumni of that era who were members of Lho Chi gather occasionally to recall their halcyon days above the Pullman hills.