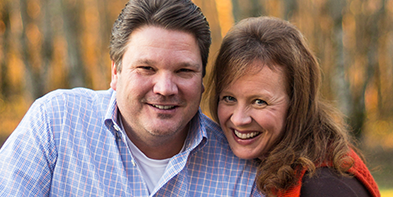 In between mastering dosage forms, drug knowledge, patient assessment, and medication therapy management, WSU pharmacy alumni Leon and Merrie Kay found more than just the inspiration and drive to be outstanding pharmacists: they found each other.

In fact, there are many WSU alumni who found more than an education and career through the College of Pharmacy. Many also met their future spouses (89 couples to be exact), either in the hallways between classes, during student club functions, or through activities outside of class.

And like many of our Cougar pharmacy couples, Leon and Merrie Kay Alzola’s pharmacy love story is also one that exemplifies a love of pharmacy. 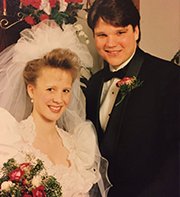 Leon grew up in Warden, a small town in Eastern Washington, and grew up loving the Cougs.

“Where else would I have gone?” he asks.

Merrie Kay was born in Winter Haven, Florida, but spent the majority of her childhood in Washougal, Washington. Her mother took her to visit WSU in 1988 and they met the interim dean of pharmacy, Larry Simonsmeier, who inspired her to pursue pharmacy at WSU.

Leon and Merrie Kay met in August 1989 at a Kappa Psi initiation lunch. It was Merrie Kay’s first year at WSU, and they started dating in the following spring. Leon proposed during finals week in the fall of 1991 and they have now been married for 23 years.

Merrie Kay and Leon live on a small farm outside of Washougal, where they occupy their leisure time with a small farm, animals of all sorts and sizes, and one spoiled dog named Zva.

“We frequent the golf course as much as possible, enjoy snow skiing, foreign travel, and love cooking and a nice bottle of red wine,” says Merrie Kay, “or two.”

Their favorite time of year is the fall when they can spend Saturdays watching college football and cheering on the Cougs. Leon has a daughter named Briana, who is also a WSU grad.

Leon graduated from the WSU College of Pharmacy in 1991. After practicing in home health care and independent pharmacy for a few years, he changed paths and has spent most of his professional career with Fred Meyer Pharmacy. He has held a variety of positions, working his way up from staff pharmacist to his current role as the director of pharmacy for Fred Meyer.

Leon is an active member, and the 2014 president, of the Washington State Pharmacy Association (WSPA) and has received three WSPA awards: Distinguished Young Pharmacist, Bill Mueller Outstanding Mentor, and Pharmacist of the Year. He has served on multiple advisory boards, including the Washington State Board of Pharmacy and the National Association of Boards of Pharmacy where he served on several committees. He is also active in his local Southwest Washington Pharmacy Association, where he has served as president for three years and a board member for two.

Merrie Kay graduated with her degree in pharmacy from WSU in 1993. She worked for Fred Meyer Pharmacy for over 20 years, serving in a variety of roles including pharmacist, manager, clinical care coordinator, and regional supervisor. In 2014 Merrie Kay joined Novo Nordisk, a multinational pharmaceutical company focused on diabetes care management products. She is currently a senior account executive with the company, based in Portland. Her focus is on education of current and future practitioners in disease state management and control of long-term complications to improve outcomes for patients with diabetes.

Merrie Kay has also collected a spectrum of professional honors and awards. She is actively involved in the WSPA and served as president in 2009. She also serves on multiple pharmacy advisory boards, including the dean’s advisory board for WSU where she serves as chair.

This past spring, the College of Pharmacy named Merrie Kay the Outstanding Alumna of the Year for 2014.

Coaching and developing health care teams throughout their careers, Merrie Kay and Leon have been professional mentors to many young pharmacists and students.

“The energy of the young practitioners and the passion they have in changing the future of pharmacy practice is invigorating,” says Merrie Kay.

When efforts began at the WSU College of Pharmacy in 2014 to initiate an alumni-to-student mentoring program, it was “a given” that they would both be involved as mentors.

“I love working with all of those bright minds. Those so eager to learn and experience pharmacy life. They inspire me to be better. A better leader, and a better professional,” says Leon.

Thanks to their leadership and generous contributions, Leon and Merrie Kay have helped make the WSU Pharmacy Alumni & Student Mentor Program, sponsored by Fred Meyer, a success and they continue to help WSU develop the next generation of leaders in the pharmacy profession.