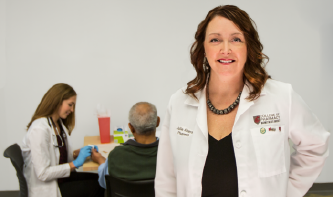 Washington residents in King, Snohomish and Pierce counties will have greater access to point-of-care screening for hepatitis C in community pharmacies beginning early next year, thanks to a new research study run by the Washington State University College of Pharmacy and funded by the Community Pharmacy Foundation.

The research team is looking for a minimum of 1,000 patients to get screened for hepatitis C antibodies over the 12-month study period. However, their service goal is to screen as many patients as possible using the point-of-care services offered at five Bartell Drugs locations in Seattle and surrounding areas.

“This study will give people a link to care where they may not have had one previously, and give us the opportunity to write a protocol that others can take and replicate,” said Julie Akers, who is a pharmacist, a clinical assistant professor at WSU, and the principal investigator heading up the study.

According to the Centers for Disease Control and Prevention (CDC), hepatitis C is a blood-borne virus that infects the liver and becomes a long-term chronic illness for 70%-85% of people who become infected. The CDC recommends that anyone born during 1945-1965 be screened for hepatitis C, even if they do not meet any of the other risk factors. According to CDC data, people born during this time are five times more likely to be infected.

But many people within this demographic in Washington have not been tested, said Akers.

“We are not sure why people are not getting screened,” said Akers. According to the CDC over 3 million people in the US are infected with the hepatitis C virus with less than two thirds being diagnosed, she said.

The point-of-care hepatitis C service uses a simple finger-prick test, similar to the tests used to measure blood sugar, and detects hepatitis C antibodies, which will tell if a person has ever had hepatitis C. There is a certain percentage of people who contract hepatitis C and their immune system is able to overcome it, so even though they do not have the active virus in their system they will have the antibodies for it.

The patients who test positive for the hepatitis C antibodies will be referred to either their primary care provider or be connected with a list of providers who have expertise in hepatitis C, in order to confirm the virus with the full RNA test.

“The goal is by the time the patient leaves the pharmacy, they will have a follow-up appointment scheduled. We want a model that will keep costs down, but more importantly have an actual impact on the person’s individual outcome,” said Akers. “Each patient will participate in the study for approximately 30 days, including the initial in-person screening and a 30-day post-screening follow up call.”

Akers is partnering with the Washington Department of Health for marketing efforts as well as to identify providers for referral. “Partnering with the health department gave us access to the health systems that allows us to not just give people a basic screening, but to provide a quality service with linkage to care that can lead to an improvement in the health of individuals,” she said.

Robert Gish, a physician and internationally published hepatology expert, is another collaborator on the study. Gish previously published research on the point-of-care hepatitis C screening tool and several studies related to hepatitis C treatment. He will be providing content expertise as well as poster, presentation and manuscript writing assistance. As part of the study, Gish will also assist with the development of a continuing education course for pharmacists on hepatitis C, disease progression and available therapies.

The research team choose Bartell Drugs as their community pharmacy partner based on the company’s history in successfully implementing other pharmacy point-of-care programs and collaborative drug therapy agreements, which allow pharmacists to provide care for minor ailments with prescriptive authority.

Akers has had a passion for contributing to patient outcomes through community-pharmacy based services since she graduated with her pharmacy degree from Washington State University. “When we were trained to do patient assessments and immunizations, I knew that was the kind of pharmacist I wanted to be,” she said.

Before joining the Department of Pharmacotherapy at WSU in 2013, Akers was the retail pharmacies manager for the Everett Clinic in Everett, Washington. Prior to that she spent 11 years with Bartell Drugs, starting as a pharmacist and ultimately serving as a pharmacy district manager. Akers is a past president of the Washington State Pharmacy Association, and twice served as a delegate to the American Pharmacy Association (APhA) representing the state of Washington.