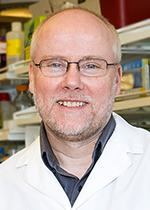 Ultimately, the goal is to validate the accuracy of the genetic tests and create the best treatment plans for patients based on their individual expression of the genes. Identification of these biomarkers is another in a series of scientific advancements made in the Trobridge lab.

“Genes express differently in each individual, and so each person has a different genetic profile or signature,” Trobridge said. “The clinical data will be analyzed for patterns to see what treatment best fits each of the profiles.”

Trobridge’s lab identified 16 genes as biomarkers for predicting prostate cancer survival and four genes as biomarkers for predicting breast cancer recurrence after treatment. The work was supported by a grant from the National Cancer Institute and follows years of progressive development by the lab of viruses that successfully transfer genetic materials to genes and red blood cells.

The prostate cancer work began about two years ago after the lab developed a technique that showed promise for identifying genes involved in the cancer’s progression. The researchers used a virus to cause mutations in the genes to find out which mutations resulted in the progression of cancer. That work was led by Arun Nalla, a postdoctoral research associate.

The breast cancer work used a virus that normally causes leukemia but has the ability to insert its DNA into the genome of a human cell. This allowed the researcher to “tag” those genes believed to be involved in breast cancer metastasis and follow them to learn how they were involved. That work was led by Victor Bii, a Ph.D. student who has been studying with Trobridge for several years.

Trobridge worked with the WSU Office of Commercialization to establish the partnership and negotiate licensing agreements with Datar Genetics Ltd. in India. Datar was among companies in Europe, Asia, Canada, and the U.S. identified as potential partners.

As part of the agreement, Datar will continue to conduct validation studies to assess the efficacy of the test. Datar will work alongside patients and clinicians in India to determine how to utilize the technology in developing individualized treatment plans. License agreements with additional companies outside of India are expected once the validation studies are complete.

Trobridge earned his Ph.D. in microbiology from Oregon State University. Prior to coming to WSU in 2010, he was a staff scientist at the Fred Hutchinson Cancer Research Center in Seattle and a research assistant professor in the University of Washington’s Department of Medicine.