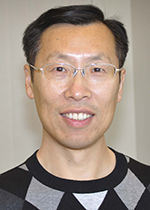 The protein itself is well known, as is its presence within the human cell. It is known as ATF5, or Activating Transcription Factor 5, and it controls how often specific genes are expressed, or in other words, copied from DNA. ATF5 regulates genes that control cell survival.

The kicker is this: the research team identified a role this protein is playing that is not related to being a transcription factor. They discovered that within the part of the cell called the centrosome, ATF5 is also acting as a structural protein.
Structural proteins perform much like their name suggests, they maintain cell shape and make up connective tissues like cartilage and bone.

Under previous scientific understanding, telling a cell biologist that a transcription factor was doubling as a structural protein would be like telling your neighbor you are building a shop in your backyard and you were planning on making the structure’s foundation out of pudding. The scientist—and your neighbor—wouldn’t believe you. It’s never been seen before.

“This is an eye opener for people working in the field,” said David Liu, the lead member of the research team. Their findings provide the first evidence of this kind, and they don’t stop kicking there.

David Liu, Ph.D., is an associate professor at the Washington State University College of Pharmacy and a corresponding author on the research article in the July 30 issue of Cell Magazine, available online today. Liu and five pharmaceutical sciences colleagues at the WSU Health Sciences campus in Spokane teamed up with scientists from Penn State, the Chinese Academy of Sciences, Zhejiang Sci-Tech University, and the University of Texas to complete the study that was funded in part by the American Cancer Society and the U.S. Department of Defense. Types of cells studied include ovary and breast cancer cells, and glioma (brain tumor) cells.

The centrosome is the cell component that is vital to successful cell division and duplication, which is a process that effects a wide spectrum of larger processes from healing, to cancer growth, to fighting off disease.

Cell cilia are important to cell movement within the body. They work like antenna, and communicate with the rest of the cell to move it toward nutrients, but knowledge is very limited on how it works, said Liu. This discovery is a missing puzzle piece that could help connect a lot dots. Liu is hoping this research will ultimately lead to an understanding of cell survival.

“Cell survival is very fundamental and affects all of our cells with broad implication across many types of disease. Knowing how to correct a defect we have the hope to treat disease,” said Liu.

Liu has been studying ATF5 for some time. In a previous research study, he tagged the ATF5 protein with green “dye”, a fluorescent protein produced by jelly fish, and discovered its presence in an area of the cell that didn’t seem to make sense. He wanted to show that the presence of ATF5 outside its “normal place” was irrelevant, so he could get back to studying what he was originally focused on: ATF5’s role as a transcription factor.

“After finding this, I wanted to disprove it. But the more we worked on it, the more it was apparent it had real purpose,” said Liu. “Ultimately, it became a big discovery.”