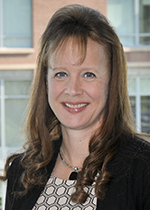 Merrie Kay is a pharmacist who is passionate about community health education. She believes if you take care of the patient, everything else will ultimately take care of itself. This WSU alumna pours her passion of putting the health and welfare of the patient first into coaching and developing the pharmacists of the future as part of the Alumni and Student Mentor Program at the Washington State University College of Pharmacy.

Merrie Kay Alzola, of Washougal, Wash., was named the 2014 Outstanding Alumna of the Year by the College of Pharmacy on Saturday, May 30. She was recognized at a reception for the college’s alumni and friends at the annual Northwest Pharmacy Convention in Coeur d’Alene, Idaho.

Her professional strengths include collaborating across healthcare boundaries, leading teams through example and innovation, promoting a fun and creative work environment, and being organized and detail oriented. She was selected for the Alumna of Year recognition for her contributions towards establishing the college’s Alumni and Student Mentor Program. Alzola championed the program to Fred Meyer Pharmacy and helped the college secure the funding needed to get the program up and running. She also advocated for participation from other WSU partners and alumni. Her efforts contributed to recruiting enough volunteers to assign a mentor to every incoming student in the program’s inaugural year.

“We are privileged to have Merrie Kay in our profession and working with our student pharmacists. She is committed to identifying opportunities for student pharmacists to network and build relationships with alumni and other thought leaders,” said Linda Garrelts MacLean an associate dean for the college.

Alzola received her pharmacy degree from WSU in 1993. She began her career by focusing in community practice and association involvement.  She served for over two decades at Fred Meyer Pharmacy, a division of Kroger. During her time at Fred Meyer she served as pharmacist, pharmacy manager, pharmacy clinical care coordinator, regional supervisor, and pharmacy sales manager.

In August 2014, Alzola joined Novo Nordisk as a senior health system account manager in the Portland area. This position allows her to be involved with local diabetes associations and organizations focused on improving population. She focuses her efforts on providing educational tools and resource materials to health system leadership to create better management and outcomes for patients with diabetes.

Merrie Kay lives in Washougal with her husband, Leon, who is a 1991 graduate of the WSU College of Pharmacy. 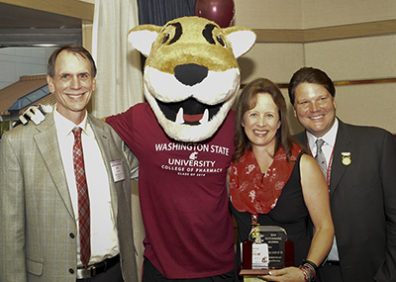 Pictured above: Gary Pollack, Butch and Leon Alzola pose with 2014 Outstanding Alumna of the Year recipient, Merrie Kay Alzola, at the Northwest Pharmacy Convention on Saturday. Photo by Jacque Garza, class of 2016