Washington Poison Center director tells his journey from the Bronx to Mr. Yuk 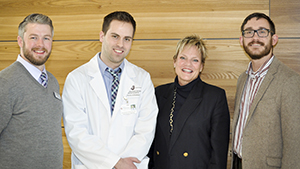 Alexander Garrard is a nationally recognized expert on poison. He has been interviewed on CNN and brought into courtrooms to talk as an expert on poisonings and drug related issues. On February 12 he spoke to student pharmacists at the Washington State University Health Sciences campus in Spokane about the path he took from his pharmacy education to his current position as the clinical managing director at the Washington Poison Center and diplomate for the American Board of Applied Toxicology.

“You are the voice to the public,” Garrard said. He explained how his role as a pharmacist and toxicologist makes a positive impact, giving his community a resource they can trust.

“It (toxicology) boils down to pharmacy,” said Garrard. He believes that pharmacists make great toxicologists because they both deal with the same material (drug compounds). In pharmacy, you look at what drug will help a symptom, Garrard said. In toxicology, you are looking at the symptom first and then asking ‘what drug caused this?’

Garrard was the seventh speaker in this year’s “Preparing for Your Career in Pharmacy” seminar series hosted by the WSU College of Pharmacy. The College coordinates the annual seminar series to expose future pharmacists to a variety of career opportunities and the industry and organizational leaders within those fields.

After receiving his Doctor of Pharmacy degree from Mercer University College of Pharmacy in Atlanta, Georgia, Garrard worked for a year in the Bronx, New York, where he realized his interest in toxicology. He then completed a post-graduate fellowship in clinical toxicology and emergency medicine at Florida/United States Virgin Islands Poison Information Center in Jacksonville, Florida.

Garrard is a board-certified clinical toxicologist and has worked as a consultant on poisoned and overdosed patients, serving around 125 hospitals at the Upstate New York Poison Center. He has extensive experience with community and media outreach, and has worked as health scientist at the Division of Strategic National Stockpile, a unit committed to public health preparedness and response at the Centers for Disease Control and Prevention (CDC). In this role he served as an expert to state and local authorities, the CDC, and other federal agencies on chemical and biological weapons and emergency preparedness.

The “Mr. Yuk” symbol was adopted by the Washington Poison Center in 1973 as an alternative to the skull and crossbones, commonly used to mark poisons at the time. The change was implemented after studies showed the old symbol had little meaning to children. Garrard is currently working in Olympia with the Washington Poison Center to address the dangers of nicotine and the lack of child resistant packaging on e-cigarettes.

The WSU pharmacy seminars are funded through the Dean’s Fund for Excellence and our community partner, the Spokane Teachers Credit Union. For information on participating in the career seminar series, or to contribute to the Dean’s Fund for Excellence to help expose WSU student pharmacists to thought-leaders and industry innovators, contact the College of Pharmacy advancement office at gocougs@pharmacy.wsu.edu or 509-358-7651.