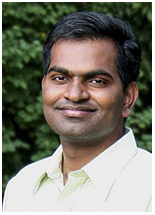 Everyone knows the importance of a good night’s sleep, but many don’t realize that as many as 10 percent of your genes are regulated by the circadian clock.

Shobhan Gaddameedhi, Ph.D., is a new assistant professor in the experimental and systems pharmacology department at the WSU College of Pharmacy who studies how the sleep cycle plays a role in maintaining genomic stability in skin. He will continue his research at WSU, which seeks to discover if maintaining a healthy sleep schedule will help prevent the development of melanoma, the deadliest form of skin cancer.

The circadian clock is the molecular time-keeping system that maintains daily rhythms in physiological and biochemical processes of an organism. According to Gaddameedhi, the role of the circadian clock in regulating these daily cycles in organs such as the liver, fat and muscle, is well known. Less is known for skin, which primarily performs protective functions against harmful environmental factors such as ultraviolet radiation (UVR) from sunlight.

Gaddameedhi will begin translational and pre-clinical studies that will look into the role of circadian rhythm in cellular sensitivity to radiation treatment and anti-cancer therapeutics with a focus on melanin pigmentation and skin cancer.

“He is employing cell culture and animal models to examine the possibility that human circadian rhythms influence the efficacy of cancer pharmacotherapeutics (drug regimens engineered to target cancer, like chemotherapy), and he has demonstrated that drug administration during certain cycles of circadian rhythms leads to improved efficacy,” said K. Michael Gibson, who is Gaddameedhi’s department chair.

“The translational significance of these studies is broad,” said Gibson.

“Having outstanding faculty members in the areas of pharmacodynamics and pharmacokinetics at the WSU College of Pharmacy and availability of the Sleep and Performance Research Center in Spokane is a great opportunity to translate basic findings of the circadian clock and chemotherapy into the clinical level,” said Gaddameedhi.

Gaddameedhi’s appointment at WSU began September 1, and he has already hired a postdoctoral fellow to help him get his research lab up and running. He is interested in mentoring young scientists at high school, undergraduate and graduate levels. More details on his research work can be found on his faculty bio page.

“Dr. Gaddameedhi is a talented new investigator whose research holds promise to revolutionize our approach to cancer therapeutics. The College of Pharmacy is very fortunate to have recruited him to WSU in Spokane,” said Gibson.