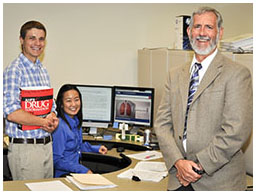 The purpose of the committee is to advise the FDA commissioner on the safety and effectiveness of drug products that are submitted to the FDA to be approved for human use. This committee specifically reviews the marketed and investigational drug therapies that treat arthritis, rheumatism, and related diseases. Baker was selected by the FDA to be one of 11 voting members on this committee.

“I look forward to representing our profession and Washington State University through this important role with the FDA in service to the American public,” Baker said.

Baker will periodically travel to the FDA in Washington D.C. to attend meetings where he and other committee members will represent the interests of consumers and consumer organizations in the reviews and recommendations they submit to the FDA commissioner.

Baker previously served as a member of the National Pharmacy & Therapeutics Committee for Medco Health Solutions for over 18 years. He is a pharmacotherapy professor and the associate dean for professional and continuing education at the WSU College of Pharmacy where he teaches student pharmacists on drug therapy, drug information, and evidence based medicine.

Baker is also the director of the WSU Drug Information Center where Baker supervises two post-graduate Doctor of Pharmacy residents specializing in drug information and pharmacy education. The center serves as a reference resource on drug-related questions to health care providers and is the primary support unit for Wolters Kluwer Health’s The Formulary Monograph Service (FMS). Wolters Kluwer Health is a drug and health information publisher, the FMS is a resource used in the formulary decision making process for hospitals and managed care systems on recently released and investigational drugs.

Baker has received numerous awards and honors including the Smith, Kline & French Laboratories Award for Superior Achievement in Clinical Pharmacy, the Washington State Pharmacy Association Pharmacist of the Year, a WSU Faculty Excellence Award, and has been included in Who’s Who in American Education, and Who’s Who in the World. He is a fellow of the American Society of Consultant Pharmacists and the American Society of Hospital Pharmacists.