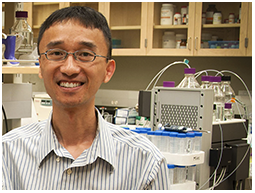 It was in pharmacy school in Toronto, Canada, that Gregory Poon realized he had an affinity for laboratory research.

“It was interesting to discover that something was the way it was because I found it to be so, not because someone told me or I read it,” Poon said. He liked that.

How he ended up in pharmacy school started with an interest in science. Pharmacy was an appealing field of study because of its diverse curriculum. “In pharmacy you take courses in biology, physiology, chemistry, pharmacology, some social sciences, and even business,” Poon said. “So it’s interesting that way, experiencing the ethos of these diverse disciplines but at the same time how they come together for the common purpose of improving health.”

After completing a bachelor’s degree in pharmacy, Poon supported himself through graduate school by working as a pharmacist in different settings, most of them hospital-related. He graduated with a Ph.D. from the University of Toronto, and then continued working as a pharmacist during a postdoctoral fellowship at the Ontario Cancer Institute, Division of Cancer Genomics and Proteomics.

Poon has been on faculty at the WSU College of Pharmacy since 2008 and has developed a research program around a specific group of proteins – known as transcription factors – that regulate the expression of genes in a highly coordinated and intricate manner, making them attractive but challenging targets for therapeutic drugs.

He also teaches pharmaceutics and the integrated pharmacology series in the Doctor of Pharmacy program, graduate courses in drug-receptor interactions and biophysical methods, and an undergraduate course in DNA biotechnology at the WSU Honors College.