Pilot project will allow pharmacists to give flu shots to children 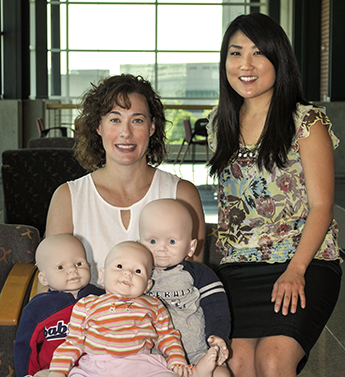 A public flu immunization clinic was mobilized at the Spokane Arena on a Saturday morning, and the student pharmacists worked alongside student nurses in helping move more than 3,400 people through the clinic that morning. For Terriff, it was one of many times in the past 15 years she was participating in a community emergency response and preparedness activity, although many of the activities were trainings and not live events.

Weighing on Terriff’s mind that morning were the “age limit signs” that had to be waived at the crowd because the student pharmacists could not vaccinate children.

“Families would stop when they saw the age limit signs and realize that they had to go to another table as opposed to any table that was open,” Terriff said. “So, we could help, but we couldn’t help 100 percent, and I thought, ‘Let’s change that.’”

She is closer to that goal today, with assistance from Doctor of Pharmacy student Cassandra Song, class of 2015, who obtained a $1,000 grant from the American Pharmacists Association (APhA) Foundation for a pilot project to train pharmacy students to give flu shots to children. Song’s project is an outgrowth of the thesis project Terriff did last year for a master’s degree in public health.

“The training is intended to expand scope, increase confidence and facilitate empowerment in student pharmacists,” Song stated in her grant proposal. Terriff and Song trained the students in March during two-hour sessions that included an interactive lecture followed by role-playing teams made up of a “parent” holding infant manikins, a “pharmacist” administering the vaccine, and an “evaluator” giving feedback to the pharmacist. The APhA Foundation grant paid for three manikins at a cost of $90 each. Injection pads are placed on the infant’s thigh and that’s where the injections are given.

“The training was awesome,” Song said. “I am passionate about our profession and have watched it evolve since I was a technician in 2002, and even just in the past three years as an intern.”

Stopping at the pharmacy for a flu shot for their children is often more convenient for working parents than taking the time to visit the pediatrician, Song said.

“Providing pediatric immunizations is a necessity in the community, so I believe it will happen. It’s inevitable.”

Students were so enthusiastic about volunteering for the training the 50 openings were filled within 10 minutes, Song said. She accepted 25 second-year students and 25 third-year students, then started a waiting list.

Song will finish her project report for the APhA Foundation at the end of this year after the trained student pharmacists have the chance to vaccinate the pediatric population this fall at outreach events. She and Terriff plan to create a model for the training that could be proposed for integration into the pharmacy school curriculum.

Song and Terriff also hope to partner with the Washington State Pharmacy Association to take this training to the state level and someday, the national level.

“Washington state has always been innovative in pharmacy practices and developed the immunization training back in the late 1970s that was then adopted by APhA,” Terriff said. “We are hoping if we are able to offer a new training model from Washington they will consider it.”