Five Washington State University Doctor of Pharmacy students with ambitions to own their own pharmacies have received Cardinal Health scholarships. 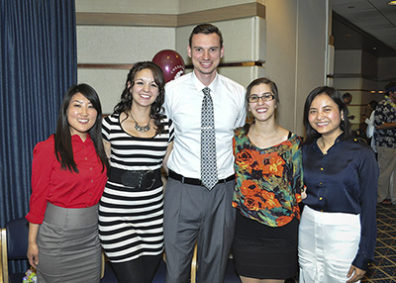 Student pharmacists Cassandra Song, Bridget Mummey, Mark Goff, Sekinah Samadi, and May Myngoc Chung Son have a lot in common. They are all going into their final year of pharmacy school, they all want to eventually own their own community pharmacy, and each of them has received a $5,000 scholarship from Cardinal Health.

Son and Goff have already set plans in motion for pharmacy ownership in the State of Washington, and Goff is interested in providing pharmacy services tailored to Russian-speaking immigrants in Spokane. In fact, four of the five students have expressed interest in focusing on rural or underserved populations.

“I keep my eyes open and vigilant for the right opportunity and the right ‘fit’ for my ownership style,” wrote Song in her scholarship essay. “My business plan competition teammates [and I] have the same vision of our future pharmacy; one that deals with the family unit, chronic disease state management (particularly diabetes), and public health initiatives.”

The five scholarship recipients will complete their final year of the Doctor of Pharmacy program through the WSU College of Pharmacy in a series of advanced pharmacy practice rotations based from one of six geographic locations in the State of Washington.

Mummey will finish her year in Washington D.C. in a rotation with the National Community Pharmacy Association. Fewer than 10 students nationally were accepted to participate in this administrative rotation that will give her the opportunity to interact with independent pharmacy owners from across the United States.

With degrees in hand, it’s then on to setting up shop.