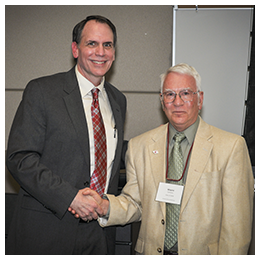 Wayne Clemens of Spokane, Wash., has been named the 2013 Outstanding Alumnus of the Year by the College of Pharmacy.

Clemens was presented with the award at an evening celebration on May 2, 2014, in Spokane for his contributions of time, expertise and financial support over many years to students in the Doctor of Pharmacy program interested in pharmaceutical compounding.

After receiving his pharmacy degree from WSU in 1970, Clemens worked in hospital pharmacy in Spokane and then went to work for the pharmaceutical company Eli Lilly as a sales representative. After three years of traveling around the western United States, Clemens decided to return to Spokane.

“I had half the world for a territory, or what seemed like it. It was a new division at the time,” said Clemens. “I didn’t like having a boss, so I bought a store.”

Clemens bought The Medicine Shoppe, an independent retail pharmacy in Spokane, in 1976. Clemens started mentoring student pharmacists in compounding in the 1980s, and his pharmacy still partners with the WSU College of Pharmacy to provide a compounding rotation for students.

Drug companies produce medicine in standard doses. Compounding is when pharmacists customize prescriptions to better fit the individual. This can involve converting a medicine from a tablet to a liquid form, or adjusting the dosage or dosage form. For example, many drugs are not produced in dosages appropriate for children. Pediatric medicine is something that is often compounded by a pharmacist.

“Compounding is about problem solving,” said Clemens. “It allows a pharmacist to provide a correct dosage to a patient when they don’t fit the ‘one size fits all’ standard.”

Not all pharmacies provide compounding services, which makes it an ideal niche for pharmacy entrepreneurs interested in owning their own stores, Clemens said.

His support has allowed many WSU student pharmacists to travel to and participate in compounding training hosted by the Professional Compounding Centers of America (PCCA). Some of the many compounding resources offered by the PCCA are in-house training laboratories and Accreditation Council for Pharmacy Education (ACPE)-accredited continuing education programs.

WSU pharmacy students also compete in the Student Pharmacist Compounding Competition sponsored by MEDISCA. Clemens served as a judge at the Spokane compounding competition earlier this spring. A team of WSU students advanced to compete at the national event held at the University of Florida in Gainesville. The WSU team won 3rd place overall out of 20 different colleges of pharmacy.