WSU College of Pharmacy hosted their annual Donor Appreciation and Awards Night on Friday, May 2 at the WSU campus in Spokane to recognize those who have made significant contributions to the College in the last year.

“The past year has brought plenty of reasons to celebrate for the WSU College of Pharmacy,” said Associate Dean of Advancement Linda Garrelts MacLean.

The College is finally consolidated on the WSU campus in Spokane, faculty researchers are settling into the new Pharmaceutical and Biomedical Sciences Building, developing established and new interprofessional collaborations with neighbors in medical sciences, nursing and other health sciences.

All of these achievements have been possible because of people and community partners who donate resources to WSU and the College of Pharmacy, MacLean said. 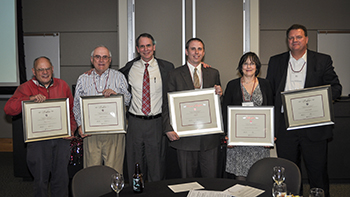 The five new Benefactors honored at the event represent over $1 million in combined giving to the College of Pharmacy in support of student scholarships and academic programs.

The Health Sciences and Services Authority of Spokane County (HSSA) was again recognized for their continued partnership with the WSU College of Pharmacy. The HSSA has awarded a total of $3.4 million to the College in support of new facilities and recruiting top faculty to Spokane. Read more about how HSSA supports health sciences development in Spokane and the College of Pharmacy

The College also announced its Outstanding Alumni of the Year: Wayne Clemens, class of 1970. Clemens was honored for his contributions to the Doctor of Pharmacy program over the years to support education in pharmaceutical compounding.