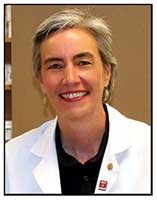 SPOKANE, Wash. – A community pharmacist in Snohomish, Wash., has received national recognition for her work with pharmacy students as an adjunct faculty member at Washington State University.

Janet M. Kusler was named Preceptor of the Year by the National Community Pharmacists Association Foundation. A preceptor is a practicing pharmacist who mentors and trains pharmacy students in a practice setting in their final year of school. Kusler has been a preceptor for WSU for more than 20 years.

Owner of Kusler’s Pharmacy in Snohomish, she received the Innovative Pharmacy Practice Award in 2006 from the Washington State Pharmacy Association after she remodeled her pharmacy to include a demonstration kitchen for cooking classes and a counseling room for vaccinations and other pharmacy practice activities. She already had been offering community health classes about asthma and allergies, menopause, osteoporosis, children’s health, adrenal fatigue and more.

She is a 1980 graduate of the WSU pharmacy program and serves on the College of Pharmacy’s Dean’s Advisory Council.

“Janet Kusler provides excellent care to patients, contributes in meaningful ways to her community and serves as a true role model to student pharmacists,” wrote her co-nominator for the award, Linda Garrelts MacLean, an associate dean and clinical professor at the WSU pharmacy college.

Erik Nelson, a 2013 graduate from the college, initiated the nomination after spending time with Kusler in fall 2012. Her influence, he said, was profound; it changed the way he thought about his future, and he is in the process of buying an independent pharmacy in Spokane.

Kusler gives an annual lecture in MacLean’s elective class on entrepreneurial pharmacy, and MacLean included in her nomination the following Kusler quote from a recent lecture:

“I talk to customers at the grocery store, when walking my dog in my neighborhood, at the local bar, at church, at fundraisers, at the baseball field, at board meetings. When I am at work, I talk to customers about what I am cooking for dinner, how my dog is doing, what band was playing last Saturday night, who was missing from church, how much money our foundation made and whether or not my grandson will be playing football in the fall. You see, you can’t separate work from your community.”

Kusler is the 11th recipient of the annual national award, which will be presented at the NCPA annual convention in Orlando, Fla., in October. Winners must demonstrate high standards of professionalism and a commitment to students as professional mentors and teachers.

Find this news release at WSU News online at http://bit.ly/19Oomn7.