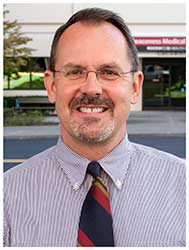 SPOKANE – Donald L. Spedden, a clinical staff pharmacist at Deaconess Hospital in Spokane, has been named the 2013 Preceptor of the Year by the College of Pharmacy at Washington State University for his work with students in their final year of the pharmacy degree program.

Spedden was nominated by the students. He is one of about 350 active preceptors in Washington state who supervise pharmacy students while they move through a series of six-week internships they do in their final year of the pharmacy program. Spedden has been a WSU preceptor at Deaconess since 2001.

Spedden graduated from the WSU pharmacy program in 1983 and has been working as a pharmacist in Spokane since that time. In 2012, he received an “Outstanding Mentor” award from the Washington State Pharmacy Association, and in 2010, he was named Employee of the Year by Community Health Systems Deaconess Medical Center.

The WSU preceptor award is given to recognize outstanding contributions to the educational development of future pharmacists by demonstrating high standards of professionalism, ethics and clinical practice.