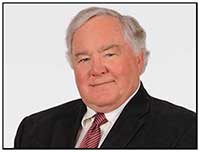 This fall the College of Pharmacy honored longtime faculty member R. Keith Campbell, who will retire after 45 years at Washington State University. Campbell will remain on campus as a faculty emeritus and continue his work in diabetes. He was honored at a retirement celebration at the Spokane Club on October 5.

“It is very difficult to encapsulate Keith Campbell’s impact on the College of Pharmacy and the profession because it is so immense,” said Professor John White, a longtime colleague of Campbell’s and the current interim chair of the Department of Pharmacotherapy, where both work. “Keith has utilized his intelligence, wonderful sense of humor, easy going manner, encyclopedic memory of people’s names and lives —  along with his innate desire to help people — to create a wide wake of positive change in the lives of many.”

White said he has worked with Campbell for more than 25 years and is still amazed when they walk together through any airport in the country or attend professional meetings at how many people know Keith.

“People come from every direction and walk of life to shake his hand, hug him, and thank him for something that he has done for them,” White said.

R. Keith Campbell grew up in Spokane Valley, Washington. He went to work mowing lawns at eight years old. He attended Central Valley High School and worked at Appleway Motors as a teen. Campbell attended Washington State University in Pullman, and graduated with a degree in pharmacy in 1964.

After school Campbell returned to Spokane and got a job managing the pharmacy at a medical clinic. He was active in the Spokane Pharmacy Association and volunteered in the local community, working to reduce drug use in youth through counseling and education.

At the pharmacy, Campbell used a “professional fee” process of billing that allowed him to include the counseling element in his pharmacy practice. This went beyond the “count and pour” stereotype that was professional pharmacy at the time.  He was given 10 minutes during each of the clinic’s periodic medical review meetings to give his opinions to the doctors regarding the drug therapies they were using – also something that was unusual at the time.

Campbell was hired by Dean Allen I. White at the WSU College of Pharmacy in 1968, and was selected to serve on the curriculum committee for the College, along with developing the continuing education program and teaching. Over the next 45 years, Campbell would serve as a program administrator, professor, director, student advisor, and even many years as associate dean of student services. He currently holds the R. Keith Campbell Endowed Professorship in Diabetes Care, which is a position created in his honor.

“Half the money spent on drug therapy is wasted because people don’t finish their regimens or use their medications as intended.  A big potential for cost savings is promoting pharmacist interaction with patients,” said Campbell in a recent interview.  Studies have shown that developing the pharmacist-patient relationship increases the likelihood of patients finishing their drug regimens, which decreases the chance of recurrence of illness along with decreased overall health care costs. Clinical pharmacy can do a lot to supplement patient care where otherwise there would be little or none, said Campbell.

The focus on patient care in pharmacy began in the U.S. when clinical pharmacy rotations were adopted by the University of California, San Francisco in the 1960s.  Campbell visited UCSF in 1968 to see how their program worked and was assigned to go on rotations with Dr. Peter H. Forsham, who was director of the Metabolic Research Unit at the time and a world renowned researcher in endocrinology and diabetes. He and Forsham had something in common: both had been diagnosed with Type 1 Diabetes before the age of 10. Campbell gained valuable exposure to the clinical rotations model, and this experience helped to mold the WSU clinical pharmacy curriculum.  Campbell pitched the idea of pharmacy rotations to hospitals in Spokane and the surrounding areas, and served as the liaison to securing the hospital contracts necessary to get pharmacy students into those rotations. In 1969 the College implemented its first experimental “rotations model” which also featured some new courses, including a pathophysiology course on how different disease states effect patients. After 1969, rotations moved from encompassing eight weeks of the curriculum to a full year, and by the 1970s, clinical rotations were being rapidly adopted all over the country.

Campbell served as the director of continuing education for 28 years developing continuing education programs for professional pharmacists. During this time, he developed numerous unique live or self-study programs. For example, in 1997 Campbell received funding to run a pilot program that hired a pharmacist to work in a medical office, not dispensing, but dedicated solely to assessing patient regimens and providing counsel to doctors and patients. He put together a 15 week program on management of disease states, and wrote a book on AIDS that was used in a continuing education self-study program.

Following this drive for continuing education, Campbell received his master’s degree in business administration from WSU in 1972 and went on to teach a pharmacy management course. “I loved teaching the management course,” said Campbell.

In 1969 Campbell served on the committee that was responsible for enacting the continuing education requirement for pharmacists in the state of Washington.

Health care has been traditionally centered on acute care, but people with chronic diseases do not fit well into that model, said Campbell. Other health care providers, like pharmacists, can help medical doctors to address the needs of patients who manage chronic diseases.

Being a clinical pharmacy educator with diabetes himself made Campbell specifically qualified to step into diabetes management education. “At 8 years old I was told: You will be blind by 30 and dead by 40,” said Campbell. This has translated into a passion for diabetes care advocacy.

Campbell wrote one of the first papers on the use of insulin pumps. “I think I was about the seventh person in the world to use one,” Campbell said, and he’s one of the longest continuous users of an insulin pump, “34 years, six months, 23 days… ” Campbell said as he looked at his watch and smiled.

Campbell spent many years using his diabetes and pharmacy management experience to design research studies. He would then work with pharmaceutical sciences researchers to conduct these studies. Among these was a study to improve the stability of insulin at room temperature, something that had been a key concern with using early insulin pumps.

During the 11 years he served on the advisory board to the national Diabetes Research and Education Fund he was able to bring many diabetes research grants to the state of Washington. He was asked to present on diabetes and natural medicine options during grand rounds for the University of California San Francisco at Moffitt Hospital, and gave the keynote address on the use of insulin pumps to the Hellenic Endocrine Society in Athens, Greece.
Campbell was the first pharmacist elected to the board of directors of the American Diabetes Association. He was one of the 17 founding members of the American Association of Diabetes Educators, and has served on their board as well. He hosted a weekly radio talk show “Ask Your Pharmacist” that ran nationally for just over a year, and more recently he has written for a periodic online blog on diabetes management through DiabetesProductSouce.com.

Campbell has received national recognition awards for impacting the practice of pharmacy (Paul Parker Medal) and diabetes care (Outstanding Health Care Educator in the field of Diabetes), and received such honors as the Distinguished Service Award from the Diabetes Educators and the Outstanding Pharmacy Administration Professor from the NCPA. He was the first recipient of the Outstanding Alumnus Award from the WSU College of Pharmacy, and received numerous teaching awards from WSU and the College of Pharmacy students including the student-nominated Teacher of the Year on four occasions.

Campbell has set an example of what one person can do to impact the quality of life for so many living with diabetes. Campbell has also done a lot to raise awareness of the importance of the pharmacist’s role in diabetes. “Pharmacists can do more than count and pour,” says Campbell.

So what else is there to do for someone who has done and achieved so much? “I feel like I’ve already lived two or three lives,” said Campbell.  “I’ve met Sidney Pointier and Ted Williams, I’ve been to all 50 states, and I’ve met three presidents.” (Kennedy, Nixon and Clinton)  Well, here’s the beginning of life number four: retirement. But he gives little indication of slowing down – although he might sleep in a little more.

Campbell has mentioned private consulting, guest lecturing, and continuing to assist with advancement activities at the WSU College of Pharmacy, where he will maintain emeritus faculty status. He is planning to team up with the local Pullman Regional Hospital to continue with diabetes care advocacy and education, and maybe do some writing. Campbell will also continue to be involved in events through the College of Pharmacy Alumni Community/Organization (newly dubbed “the Cougar PAC”).

The College of Pharmacy hosted a Retirement Gala Celebration at the Spokane Club in Spokane, Washington, on October 5, to honor Campbell’s 45 years of service to the College, his achievements and success in diabetes education. The event raised over $45,000 to benefit the R. Keith Campbell Endowed Scholarship in Pharmacy to provide support for WSU College of Pharmacy students. The evening included a cocktail reception, a program and a live auction.

To donate to the R. Keith Campbell Endowed Scholarship Fund, go to: https://secure.wsu.edu/give/default.aspx?fund=3439, or contact the WSU College of Pharmacy at 509-368-6675, or gocougs@pharmacy.wsu.edu.