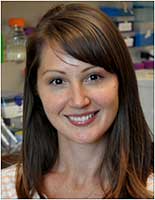 SPOKANE, Wash. – A graduate student working in the research laboratory of a Washington State University exercise physiologist has received a second year of research funding from the American Physiological Society.

Heidi Medford was one of five students nationally to have the annual grant of $28,300 renewed for a second year. Last year, she was one of eight to receive the award, which can be renewed for up to two years.

Known as the Porter Physiology Development Fellowship, the funding is awarded after a competitive evaluation of applicants’ research proposals, grades, community outreach, and other factors. Medford had the highest ranked renewal application this year and as a result, received the added designation as the Eleanor Ison Franklin Fellow.

Medford is studying under Professor Susan A. Marsh and is finishing her third year of work toward a Ph.D. in nutrition and exercise physiology. She is investigating whether exercise can reverse the adverse effects on the heart caused by consumption of the “Western diet” – high in saturated fat and sugar.