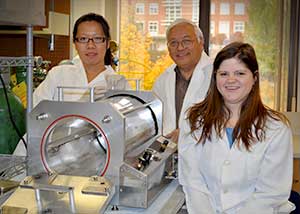 Supported by a new $406,000 grant from the National Institutes of Health, researchers in the Department of Pharmaceutical Sciences at Washington State University have set out to find some answers.

“It appears that, in the early phases of the pain relief, the hyperbaric oxygen works on a particular opioid receptor,” said Dr. Raymond M. Quock, professor and principal investigator on the grant from the NIH Center for Complementary and Alternative Medicine. “But that doesn’t appear to be what is at work in the later phase of the pain relief, which lasts from 24 hours to 21 days after the treatment.”

Quock’s lab and colleagues are building on the findings they published two years ago in the Journal of Pain.
They discovered that treating mice in a hyperbaric chamber with 100% oxygen at 3.5 times the normal atmospheric pressure—or about the pressure you might feel under approximately 80 feet of water—for 60 minutes daily for four consecutive days resulted in pain relief that was still evident three weeks later.

Their experiments implicated nitric oxide (NO) and kappa opioid mechanisms in the brain in the early phase of the pain relief, which ended after 6-8 hours.  At 24 hours after hyperbaric oxygen treatment, a late phase of pain relief emerged and lasted for 14 days.  At 21 days after treatment, there was still a 40% reduction in pain.  Their research so far has implicated a number of possibilities for the later phase of relief, which appears to be independent of opioid mechanisms.
“We want to find out what we’re turning on in the brain that results in this unusually long lasting pain relief,” Quock said “Someday that knowledge could result in development of a small-molecule pharmaceutical that might activate the same neuronal pathway and reproduce the long-lasting relief of chronic pain,” he said.

It also may result in hyperbaric oxygen being approved someday for chronic pain relief, Quock said. It is currently approved by the Food and Drug Administration and the American Medical Association for treating a dozen or so conditions, but chronic pain relief is not one of them.

Quock has spent more than 25 years researching medical gases—in particular, nitrous oxide or “laughing gas”—and how it suppresses pain and anxiety, but it was serendipitous or maybe fortuitous, he said, that five years ago, he started working with hyperbaric oxygen.

He collaborated with colleagues at the Chico Hyperbaric Center in Chico, Calif., and they eventually helped him obtain a hyperbaric chamber for use in his research laboratory in Pullman.

A co-investigator on the NIH grant, Dr. Amber Buhler, at the Pacific University School of Pharmacy in Hillsboro, Ore., has expertise in immunohistochemistry, as do graduate students Yangmiao Zhang and Abbey Brewer in Quock’s lab, and it is their role to examine the mouse brains after the behavioral portion of the experiment to map the pathway. Dr. David W. Koh, an assistant professor in Quock’s department and an expert in molecular biology, is another co-investigator on the grant.