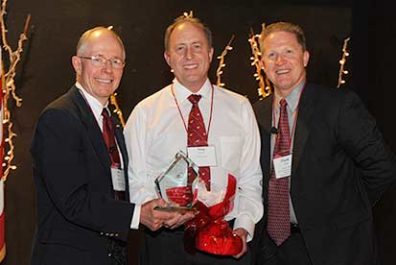 The Alumnus of the Year award recognizes an alumnus whose contributions to their community and the health care profession have brought distinction to the College.

After graduation from the College of Pharmacy in 1982, Gibbons returned home to work with his father, WSU class of 1956 alumnus Everett Gibbons and owner of Gibbon’s Pharmacy in Toppenish, Washington.  He also worked at other pharmacies in the area including the Indian Health Clinic and at a local hospital pharmacy.

Gibbons was named the Washington State Pharmacist of the Year in 2008. He has served as a member of the College of Pharmacy Dean’s Advisory Council, and has played an instrumental role in efforts to increase scholarship support for students.  Gibbons is currently a member of the Yakima Valley Pharmacy Association, and is a member of the Cardinal Health Northwest Retail Advisory Committee. He and his family have been long time supporters of WSU, and have recently established an endowed scholarship for future pharmacy students.

The award was presented to Gibbons by one of his 1982 classmates, Frank D. Cholaj, and by class of 1965 alumnus John Oftebro, at the evening awards ceremony attended by more than 250 alumni, students and faculty.