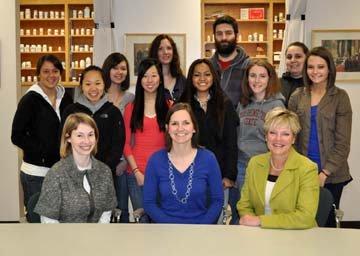 Would it improve the health of diabetes patients in rural areas if student pharmacists telephoned them weekly and used motivational interviewing techniques in their conversations? And what kind of impact would the telephone calls have on the students?

Those are questions faculty in the WSU College of Pharmacy and WSU Extension are trying to answer.

Ten pharmacy students voluntarily trained to be telephone coaches and then each called four to five patients a week for eight consecutive weeks.

The students just completed the telephoning phase of the project. All calls were recorded and in addition, students completed a three-page checklist after every call, identifying the various topics of conversation, such as whether they helped the patient plan for coping with a difficult situation or setting and achieving a goal.

The student coaches were trained to coach patients in goal setting to modify their lifestyles to better manage their diabetes through the use of motivational interviewing and telephone coaching.

“It is too early to determine if there are positive results for our patients, but we can say that anecdotally, the coaches and some patients are providing very positive feedback,” said Linda Garrelts MacLean, an associate dean in the College of Pharmacy and one of two principle investigators on the project.

For example, one week a patient reported she had made an appointment to see her doctor, which is a positive step, and the doctor found her blood sugar was down. When the student coach asked the patient what influenced her behavior, she replied she knew the coach would be calling to talk with her and so she got on her bicycle and rode it. The patient thanked the coach for checking on her.

Another patient who was resistant in the beginning to any form of exercise except water aerobics reported she was starting to feel better because of improved nutrition and she had enough energy to consider adding walking once a week to her exercise routine.

“Cost effective strategies are desperately needed to improve self management of diabetes,” MacLean said. This could reduce costly and painful diabetic complications in rural areas where the rates of diabetes are unusually high, she said.

In addition to studying the information gathered during the telephoning phase, the faculty will give the patients a post-calling questionnaire to assess their perception of their ability to take care of their diabetes, how they plan to handle any depression, if they can practice good eating, if they are willing to seek out a health care provider when they have questions and many other questions. The researchers will also look at the patients’ blood sugar levels, blood pressure and weight before and after the coaching sessions.

The 50 patients who are participating in the study were identified through a WSU Extension community education project known as “On the Road to Living Well with Diabetes.” Extension has been educating underserved populations around the state with “On the Road” since 2001. Funding for On the Road as well as this Telephone Coaching study comes from the U.S. Department of Agriculture.

Shirley M. Broughton, a faculty member at the WSU Puyallup Research and Extension Center, is the other co-principle investigator on the project.