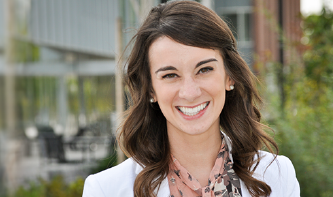 Kimberly Paulson, a student pharmacist at Washington State University, was appointed to a two-year term on the Student Leadership Council (SLC) for the National Community Pharmacists Association (NCPA). The WSU College of Pharmacy has sent eight students to serve in this national leadership role in the last seven years.

Paulson joins an elite group of WSU pharmacy student leaders, including two WSU students who served as president of the council.

“The goal of the NCPA Student Leadership Council is to support the development of future leaders in community pharmacy and to recognize student pharmacists who have a strong interest in entrepreneurship and pursuing a career in community pharmacy,” said Paulson. Over the next two years she will be representing NCPA student chapters in Alaska, Arizona, California, Hawaii, Idaho, Nevada, Oregon, Utah, and Washington.

“I get to travel to schools in my region, give lectures about the benefits of NCPA, and meet with student executive members to help give them ideas on how to improve their chapter,” she said.

“The SLC experience that I am most looking forward to is the NCPA steering committee meeting. I sit on the compounding steering committee and have found it an honor to be the only student pharmacist to sit on this board of influential pharmacists who are experts on this topic,” said Paulson. The committee addresses issues relating to the practice of pharmacy compounding, including the right of pharmacists to compound drugs, legal and legislative concerns, and guidance and education to enhance the practice of furnishing medications to patients with special needs.

Paulson is from the town of Rosalia, Washington. She completed her bachelor’s degree in biology at WSU and is currently in her third year of pharmacy school at WSU in Spokane.

Once she has obtained her Doctor of Pharmacy degree, Paulson plans to pursue a post-graduate residency specializing in community pharmacy in order to gain experience to further her goal of owning her own independent pharmacy.

“I know that NCPA has given me the experiences and tools to be able to do just this,” she said.