SPOKANE, Wash. – Pharmacy research leader Gary Meadows is retiring from Washington State University after 39 years of service, though his affiliation with WSU as an emeritus professor continues.

He was the first WSU researcher to receive an investigator-initiated grant from the American Cancer Society. He studied alcohol’s effect on immune responses that influence tumor growth and metastasis. His validation of a model for administration of alcohol in research mice is referred to as the “Meadows Model of Alcohol Administration in Rodents.”

He was part of the group that founded the volunteer Comprehensive Cancer Control Partnership, now known as the Washington CARES About Cancer Partnership. Its mission is to reduce the occurrence of cancer in Washington and advocate for equal access to prevention, diagnosis and treatment resources.

“This was a different way of looking at cancer for me,” Meadows said. “I’ve done basic research, but this was all about impacting people and how we could reduce cancer in our state.”

He helped establish the Department of Pharmaceutical Sciences at WSU and served four years as its first chair. He was director of the College of Pharmacy’s pharmacology/toxicology graduate program 1992-96 and later served two years as associate dean for graduate education and scholarship.

Rewards of research and teaching

As a pharmacy student, Meadows desired variety. Research and teaching were the answer: “I was very interested in research as a potential career,” he said.

He has maintained continuous research funding from a variety of sources since 1979. He received two research development awards from the National Institutes of Health. His research has focused mainly on tumor biology and immunology.

“I am very fortunate that I had the opportunity to follow a line of research over time and have been able to watch the science grow in that area,” he said.

Concerning teaching, “My favorite part is the interaction with students and watching how they have ended up and succeeded,” Meadows said.

His advice to aspiring scientists includes, “Try to always have a positive outlook. Any job has its ups and downs, but keep moving forward. If you have good ideas and keep trying to fund them, you will be successful. Persistence is key – and maintain your integrity.”

“I will miss the interactions with faculty and students,” he said, expressing gratitude for his colleagues and their support. 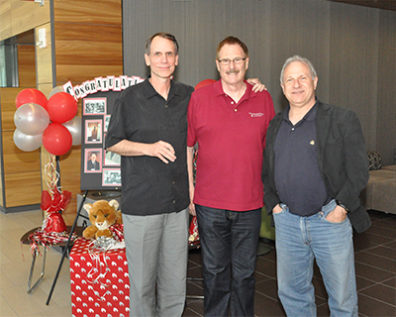 He looks forward to staying active. He enjoys walking and gardening, and he plans to do some traveling with his wife and family.

“I will be reinventing myself, so who knows what the future will hold. I intend to embrace it,” he said.

He will continue to serve on committees for students who are in the WSU pharmacy graduate program. He will continue on the advisory board in North Dakota for the IDeA Network of Biomedical Research Excellence (INBRE), an organization that supports undergraduate biomedical research and encourages students to go into health related careers.

He is an honorary professor at the Medical College of Zhengzhou University in the People’s Republic of China. He has been on two sabbaticals – as a visiting scientist at the Experimental Immunology Branch at the National Institutes of Health and as a professor at the University of British Columbia.