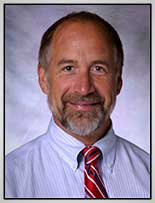 SPOKANE – John R. White Jr. has been promoted to chair of the Department of Pharmacotherapy at the Washington State University College of Pharmacy. White is a licensed pharmacist and has a Doctor of Pharmacy (Pharm.D.) degree from Mercer University in Atlanta, Ga. Additionally, he completed a residency and a fellowship in pharmacokinetics/pharmacodynamics at the University of California, San Francisco.  He has been affiliated with the WSU College of Pharmacy for more than 20 years and has been serving as acting chair of the department.

White has been extensively involved in diabetes research and education since 1987. He has given hundreds of lectures on the subject nationally and internationally to pharmacists, physicians, physician assistants, nurses and others. His publications include the American Diabetes Association book titled, “Medications for the Treatment of Diabetes” and manuscripts in the Journal of the American Medical Association, Diabetes Care, Clinical Diabetes, Diabetes Spectrum and numerous other journals. He currently serves as deputy editor of the journal Clinical Diabetes.

In 1998 while a pharmacy professor at WSU, White completed the University of Washington’s physician assistant training that is offered in Spokane. He served for several years as a diabetes consultant and primary care provider at the Indian Health Service Clinic in Wellpinit, Wash. Currently, he is involved in the development of a nasal formulation to be used as an antidote to opiate overdose.