Director for the Center for Pharmacy Practice Research and Associate Professor of Pharmacotherapy Kimberly McKeirnan and five co-authors published, “Cultures of support and resilience are associated with certified pharmacy technicians embracing new roles,” in Research in Social and Administrative Pharmacy in October 2022.

Class of 2007 alumnus Dr. Majid Tanas’ career has spanned all aspects of inpatient, outpatient, ambulatory, and research services. As Vice President of Pharmacy Services and Chief Pharmacy Officer at Legacy Health in Oregon, Dr. Tanas has a world of experience in health systems. Prior to joining Legacy Health, he was Chief of Pharmacy Services at the National Institutes of Health (NIH) Clinical Center and worked in various administrative positions in health systems at Oregon Health and Science University after completing his Health-System Pharmacy Administration Residency at University of Washington Medicine. Earlier this year, Dr. Tanas was recognized by the American Society of Health-System Pharmacists … END_OF_DOCUMENT_TOKEN_TO_BE_REPLACED 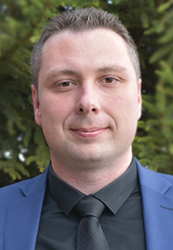 Tell us more about what USTUR does.
We study the biokinetics, dosimetry, and … END_OF_DOCUMENT_TOKEN_TO_BE_REPLACED

When it came to his own health, however, a pharmacist was his salvation.

Sauseda had experienced traumatic brain injury during multiple combat tours in Afghanistan and Iraq, and at one point was taking 18 medications to treat his symptoms.

A clinical pharmacist helped bring that number down to “a very manageable three” medications, Sauseda said, freeing him to pursue his dreams beyond the military.

WSU College of Pharmacy and Pharmaceutical Sciences alumna, Dr. Sara Dumit, was invited to attend the 70th Lindau Nobel Laureate Meeting this past summer, which convenes in Lindau, Germany. This annual meeting gives the next generation of leading scientists in the world the chance to discuss global issues ranging from climate change to genome editing with Nobel Laureates. She is among the leading theorists working on the modeling of plutonium decorporation and the development of chelation models. These models help to better understand the movement of plutonium inside the human body during chelation therapy, otherwise known as the process of binding to heavy metals which is then removed from the body. » More ...
Washington State University Honors College students who are interested in working in the growing health care industry and protecting the health of the communities they serve can now do so through the WSU Doctor of Pharmacy program. Thanks to a new agreement between the two colleges, Honors College students admitted to the College of Pharmacy and Pharmaceutical Sciences during their sophomore or junior year will be able to use PharmD courses to complete their bachelor’s degree electives while in the first year of their pharmacy education. » More ...

Through teaching and mentorship, preceptors guide pharmacy students as they work with patients in a variety of health care settings. These experiences are pivotal in determining a pharmacy student’s future career. The WSU College of Pharmacy and Pharmaceutical Sciences network of pharmacy educators extends across the state of Washington and beyond, with 250 sites and more than 400 annual volunteer preceptors and faculty members. Together, they form the backbone of WSU student pharmacists’ introductory pharmacy practice experiences (IPPE) and advanced pharmacy practice experiences (APPE).

To recognize the importance of preceptors, every year the college asks pharmacy students to nominate preceptors who go above and beyond … END_OF_DOCUMENT_TOKEN_TO_BE_REPLACED

It is always a time to celebrate when any member of our Cougar community is recognized for their commitment to the profession. This year the Washington State Pharmacy Association (WSPA) honored several Coug pharmacists on October 30 for their contributions to the profession. Congratulations to the following College of Pharmacy and Pharmaceutical Sciences alumni and faculty. » More ...
Pharmaceutical Sciences Assistant Professor Travis T. Denton and three co-authors published “The metabolic importance of the overlooked asparaginase II pathway,” in Analytical Biochemistry, a peer-reviewed journal by Elsevier. Travis Denton and 4-co-authors published, “The metabolic importance of the glutaminase II pathway in normal and cancerous cells,” in Analytical Biochemistry, a peer-reviewed journal by Elsevier. Pharmacotherapy Associate Professor and Director for the Center for Pharmacy Practice Research Kimberly McKeirnan and ten co-authors published, “Advancing a global pharmacy support workforce through a global strategic platform,” in the Journal of Research in Social and Administrative Pharmacy in October 2021. » More ...

In any given year, approximately one in five American adults is living with a mental illness. A recent survey published by the CDC found 40% of adults surveyed in the U.S. experienced adverse mental or behavioral health conditions during the COVID-19 pandemic, suggesting a critical need for people trained to intervene in a mental health crisis.

With approximately 90% of Americans living within five miles of a pharmacy, pharmacists are one of the most accessible health care providers and uniquely positioned to aid patients living with mental health conditions. The Washington State University College of Pharmacy and Pharmaceutical Sciences is making sure its … END_OF_DOCUMENT_TOKEN_TO_BE_REPLACED